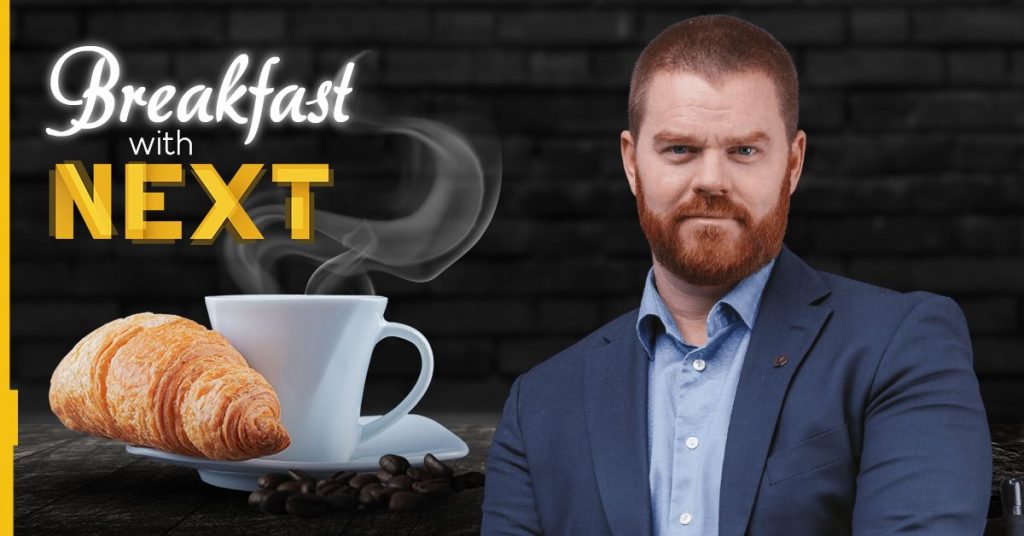 Internet Vikings CEO Rickard Vikström is known among his staff for scheduling early morning meetings. This time though, iGaming NEXT has requested an early morning slot as Sonja Lindenberg arrives for edition two of Breakfast with NEXT.

Rickard Vikström has famous friends. Netflix recently launched a series that zooms in on them. ‘The Playlist’ is a Swedish production that covers the emergence of music streaming provider Spotify and, inevitably, the Swedish hacker culture of the early 2000s, of which Vikström was a part of.

Vikström, who together with Victor Jerlin co-founded hosting provider Internet Vikings, spent most of his teenage years on the Swedish instant messaging channels for IT security.

This was where he met the founders of file sharing and download site ‘The Pirate Bay’ – once described as the internet’s most popular piracy hub, and one of the most widely used BitTorrent trackers for music, movies and software. The site is widely regarded as a predecessor to Spotify.

‘The Playlist’ is based on input from various insiders, although the site’s co-founders were not involved. Vikström just watched the series with his wife and says he noticed some inaccuracies. “A couple of times I thought: This is not how it was done.”

Looking back at that time, he is still reluctant to call himself a hacker, and instead says he knows an awful lot about “IT security”.

Vikström’s fascination with computers started in the early 1990s, when he was just 10-years-old. In the years that followed, IT became his “only hobby”, and he made friends with people who shared his passion. “We were real geeks,” he says today.

But Vikström was not just technical, he was also very entrepreneurial. Together with those friends, he created a website that allowed people to book a trip for their teddy bear to visit Stockholm. “We only had one customer, but it was good fun.”

The friends’ next business idea was a bit more useful. “We created a TV information system for schools where pupils could see what’s for lunch or if a teacher is sick. We sold it to different schools around Stockholm. It was a computer connected to a TV set that broadcasted around the school,” he says, and pauses. “It didn’t work that well either,” he adds.

When he was 19, he figured he “needed a real job” and a friend recommended him to hosting company Azalea webdesign that later became Crystone.

“I remember that shortly after I joined the company, there was a problem with one of the sites, and the technicians couldn’t fix it. I just called the CEO and told him: ‘Don’t worry. I can fix it.’

“He probably thought: who is this kid? I really was a strange guy,” he jokes, but emphasises that he did indeed fix the problem.

Another time, the firm planned to consolidate six or seven data centres into two. “I was 21, and it was quite a big project that involved moving around 1,000 servers from datacentres in Sweden and Norway to a new location in Sweden.

“I still can’t believe that they trusted me with that. I think I just said I can do it and did it. There were some minor flaws, but back then it was probably the most cost-efficient data centre. We were good at handling the costs.”

In July 2022, he took over as CEO and nowadays oversees the commercial side of the business, managing the company towards its primary objectives.

Meanwhile, the product is in the hands of a global team of IT experts under the leadership of business partner Jerlin and COO Kristoffer Ottosson.

The idea to set up Internet Vikings came about in 2007 when Vikström made the decision to leave Crystone.

Jerlin had moved to Malta a few years before to work for Scandi sports betting giant Expekt. At that time, the iGaming industry was experiencing fast growth, and the two recognised the demand for iGaming-specific hosting services.

“We had our first contract in August 2007. In March 2008, I quit my day job and from May onwards, we were fully focused on building Internet Vikings,” he recalls.

“However, during the first years, we were mainly trying to figure out what worked best,” he says, jokingly.

Internet Vikings was not Vikström’s only venture. He is a textbook example of a serial entrepreneur, and together with Jerlin, he established a number of businesses throughout the past 15 years.

In 2009, the duo, along with other entrepreneurs, founded IT-security company Stay Secure, which in 2014 was sold to Nasdaq-listed J2 Global, now Ziff Davis Inc.

Once that business was sold, the focus switched to growing Internet Vikings, Vikström recalls.

At the end of 2019, Internet Vikings appointed Jesper Kärrbrink, former CEO of Mr Green, as chairman of the board. Kärrbrink provided the right impetus to scale the business further.

In autumn 2020, the firm decided to enter the US market, which turned out to be an exciting but expensive move.

“It was first time that we took in external funding. We bootstrapped everything for the first 15 years.

“However, we have increased our annual recurring revenue by over 100% since the beginning of our US journey, and we believe that we can keep this pace despite the more challenging financial climate,” he says.

Today, the company has 15 employees in Malta, 15 in Sweden, and another 15 working from remote locations in Ukraine, Poland and the US.

“We often get asked if we want to sell Internet Vikings or if we have some other exit strategy. But why would we?” says Vikström.

“We have come a long way since we started. Creating a brand and a product that are recognised and trusted internationally. Currently, we are 100% focused on building a tier-1 iGaming industry specific hosting company because that is what we love doing.”

Vikström continuously strives to evolve as a CEO in order to become a better leader for his co-workers . “I don’t think I am the best I can be just yet, but I am really determined to become one,” he remarks, humbly.

He admits that while he enjoys the new responsibility, he does also miss the technical work every single day.

It certainly helps though that “building companies” is one of his favourite pastimes and serves as the perfect distraction.

“Some people are good at playing football, others excel in tennis. I am good at building high-tech B2B companies, and to me it doesn’t feel like work since it’s something I enjoy doing,” he adds.

Nonetheless, there are still challenges, notably the current economic climate, the rising cost of energy, and inflation. “Servers use electricity, and those electricity costs have increased by a minimum of 25% in the last six months,” Vikström reveals.

With further, as-of-yet unseen challenges on the horizon, Vikström says he is fully focused on building a sustainable business. “This, of course, is always easier when you have a great management team, and I have 100% trust in our management team at Internet Vikings.”

History buffs consider vikings to be fierce seafaring traders that conquered large parts of Europe, as well as the first European travellers to ever set foot on American soil.

According to some experts, it was their quest for technological innovation, along with the development of an operational model in line with the market realities of medieval Europe, that helped them to become the most successful traders of their time.

Fast forward to 2022, and just like their predecessors, Internet Vikings continues to pursue new frontiers while hoping to turn challenges into opportunities.