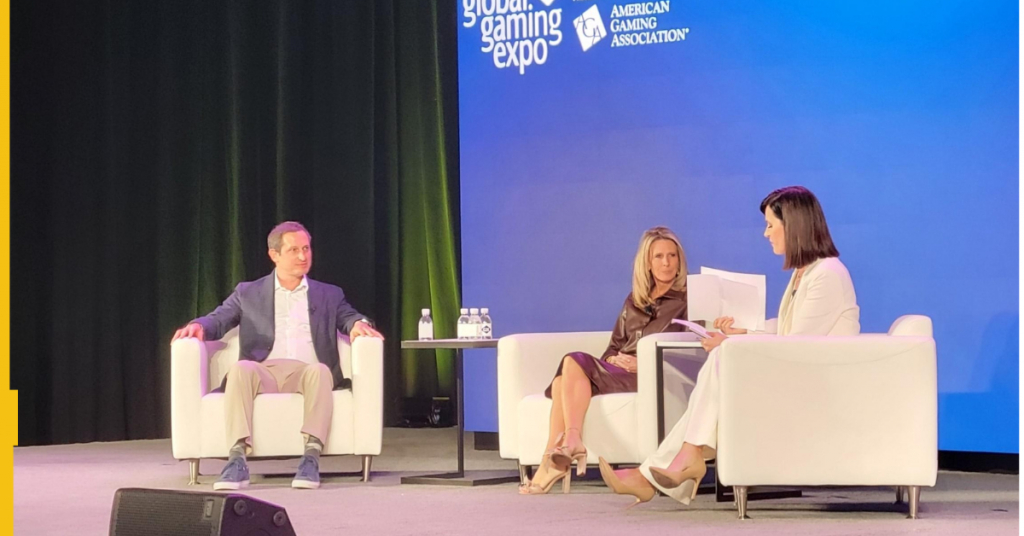 Top executives from the nation’s two leading online sportsbook operators are subtly shifting hopes toward California online sports betting legislation in 2024 after a 2022 push seems increasingly out of reach.

LAS VEGAS – Though neither DraftKings CEO Jason Robins nor FanDuel CEO Amy Howe would dismiss hopes a 2022 online sports betting ballot measure would pass, the pair said Tuesday that their companies would still push for legal wagering in California two years from now if – or when – the initiative is rejected.

Speaking alongside each other at a Global Gaming Expo panel, the pair said they would continue fighting for legal sports betting in 2024, implicitly indicating they were bearish on legalization efforts for 2022.

“I think the more time people in California get exposed to the messages, the more they’re able to sift through what’s true and what’s not,” Robins said. “I think you’ll see more momentum toward ’24, hopefully, maybe even in ’22, but probably more likely in ’24 when that’s getting passed.”

DraftKings and FanDuel have teamed up with a handful of other leading operators to spend more than $100m on a 2022 ballot measure that would amend the state constitution and permit licensed operators to accept bets statewide. Recent independent polling shows the measure is heading for defeat.

Combined, DraftKings and FanDuel have the majority of US sports betting gross gaming revenue. The two sportsbooks have been the largest contributors to the initiative.

With roughly 40m full-time residents, California is far and away the nation’s most populated state and most significant remaining sports betting legalization target. More than 30 states have some form of legal sports betting, more than 20 of which allow at least one statewide mobile wagering platform.

The major online operators’ supported measure only has 27% support against 53% opposition, according to the University of California Berkley poll released earlier this month. The lopsided opposition less than a month before Election Day has hampered expectations despite the massive spending in the state on the measure’s behalf.

Among the issues hampering the online sports betting proposal is a competing initiative on the 2022 ballot that would only permit in-person sports betting at certain tribal gaming facilities as well as horse tracks. This measure, backed by many of the state’s major gaming tribes, also appears headed for defeat, according to the recent poll.

California gaming tribes have been the biggest financial backers opposing the sportsbooks’ statewide mobile initiative, spending more than $100m. The tribes have feared statewide mobile wagering would take away money from the dozens of tribal nations in the state, many of which depend on casino dollars as the largest or sole major financial driver for their respective communities.

“California is usually on the leading edge, not the last state to embrace new innovations,” Robins said. “That said, if an opposition side is willing to spend over $100m, it’s just tough, it doesn’t matter what your issue is.”

The two sides have combined to spend more than $600m both in favor and in opposition to each measure, far and away the most expensive ballot inactive spending in US history.

Industry observers believe the competing measures have confused voters and led many to oppose both. Nationwide, sports betting legalization has majority support; all six states that previously had yes-no sportsbook approval votes on their respective ballots have approved the measure.

Robins Tuesday also acknowledged that the massive advertising blitz both for and against both measures generated by the hundreds of millions in campaign contributions may have inadvertently turned off many would-be supporters.

With the online measure seemingly headed for defeat, the industry’s major sportsbooks appear to be already gearing up for 2024. Along with California, leading operators seem inclined to support a similar ballot measure push in Florida and potentially Texas that year.

Combined, the three states make up more than one-fourth of the US population.

“We’ll absolutely live to fight another day,” Howe said. “It is hard to imagine the (total addressable market) ultimately won’t include the state of California.”