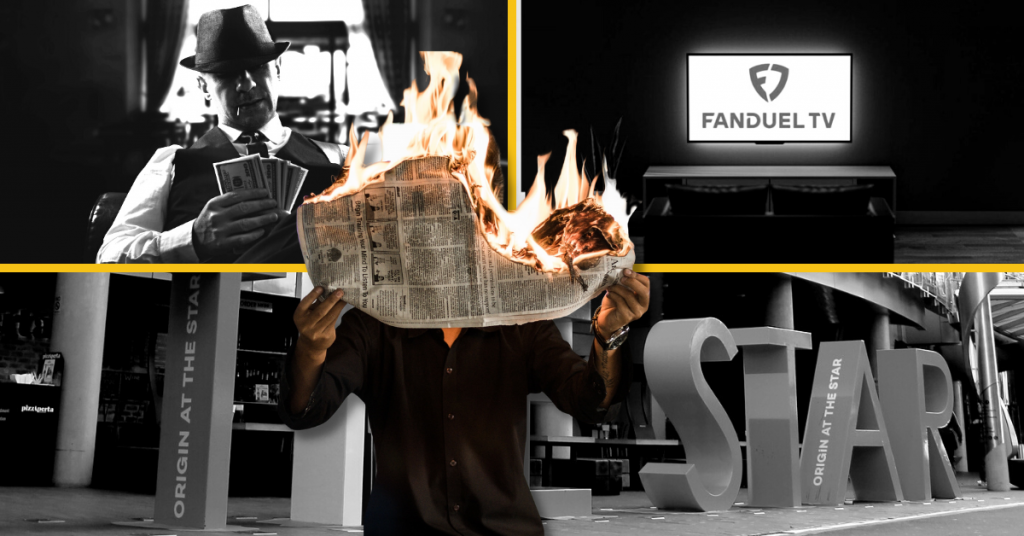 NYPD takes down a Rhino

Another edition of the Hot Copy Crime Files this week, as CBS News reported on five people charged with operating an illegal and long-established gambling business with suspected ties to the Lucchese crime family.

The charges were outlined in an indictment that was unsealed in Brooklyn federal court, as four defendants were arrested at their homes in New York, and another in West Palm Beach, Florida, CBS reported.

The Justice Department subsequently alleged that at least one person arrested in the scheme, Anthony Villani, is a direct associate of the Lucchese family, which has historically played a significant part in New York organised crime. A very simple anagram of Villani’s surname could easily point to a case of nominative determinism here.

In fact, if you take the names of all the men involved (Anthony Villani, James Coumoutsos, Dennis Flizzola, Michael Praino and Louis Tucci, Jr.) and use those to make an anagram, you end up with: “Casino villains r found out on call in some juicy jazz militia scheme, haul to prison”.

Now, I don’t know what a ‘jazz militia’ is, but let’s face it; while this may sound like an obscure cryptic crossword clue, it doesn’t exactly bode well for the wise guys in question.

Authorities said the business collected illegal sports bets and reaped millions in profits over the course of at least 15 years.

The site used web hosting servers based in Costa Rica and allegedly brought in between 400 and 1,300 bets per week, while employing dozens of bookies to pay and collect winnings in cash, the Justice Department said.

Villani is accused of overseeing the operation, and of personally receiving in excess of $1m annually from the business.

When federal agents searched his residences in 2020 during a probe, they recovered more than $400,000 in cash as well as knuckle dusters and gambling ledgers.

“As alleged, this conduct demonstrates how members of [organised crime syndicate] La Cosa Nostra continue to engage in illegal gambling operations and money laundering money-marking schemes that lead to threats of violence against anyone who stands in their way and has resulted in millions of dollars in profits to the Lucchese crime family,” said US Attorney Breon Peace in a statement.

Now the crime-driven bookmaker has been taken offline, we are left wondering when Martin Scorsese will pick up the film rights.

The Australian Financial Review has weighed up a worst-case scenario for beleaguered gambling giant Star Entertainment this week.

The casino operator now has 11 days to convince the NSW gambling regulator that it should be allowed to keep its licence following the publication of an eye-popping inquiry into a sustained period of misconduct across the business.

The report – led by senior counsel Adam Bell – concluded Star was unfit to run the Sydney casino property after being infiltrated by Asian organised crime gangs.

The Star even intentionally lured high rollers banned by the NSW and Victorian police because of suspected criminal activity at its Queensland casinos.

NSW Independent Casino Commission chief commissioner Philip Crawford, who ordered the initial inquiry, criticised the operator for arrogance and a lack of transparency.

“We still have inspectors, investigators down there very frequently,” Crawford told the AFR. “And I’m afraid the cultural arrogance, the institutional arrogance hasn’t changed much.”

The newspaper suggests the worst possible scenario – the complete revocation of its operating licence – is unlikely, although the company could still face a suspension.

The regulator also has the option to fine Star Entertainment up to A$100m.

The final punishment will be made public by 27 September, so fold out your telescopes and watch this space.

Kay Adamant she left no unfinished business at NFL Network

Moving away from organised crime, the New York Post featured an interview this week with Kay Adams, former host of NFL Network’s Good Morning Football, who recently signed a new agreement with FanDuel TV to host its new “Up and Adams” show, which premiered earlier this week.

“FanDuel is a company that’s been talking to me for a long time,” Adams told the Post. “They want to be in the content game in a really big way, and they’re leaning in to do that. When it came down to it, it was a nice offer. I’m moving to LA, which is insane because I’m such a New Yorker I can’t even drive.”

Adams added that she didn’t leave Good Morning Football specifically to take on the new job, rather that she had simply done all she needed to at the NFL Network. “I felt like my work there was done,” she said.

And it seems the firm’s top brass has been intimately involved with the development of the services.

Adams told the Post: “Not every day, not everywhere you work, does the CEO sit down and talk to you about what you want, what you consider success, and how we accomplish that. Amy Howe, the CEO of FanDuel, has sat with me for a long time to talk with me about that – the CMO Mike Raffensperger as well.”

It seems the US market-leader is now taking its content creation very seriously. It will certainly be interesting to see the impact of FanDuel TV and FanDuel+ on its bottom line in Flutter’s future earnings reports.

In addition to her role at FanDuel, Adams has also partnered with vodka brand Smirnoff to help in its search for a “cocktail coordinator” this NFL season. We’ll drink to that!