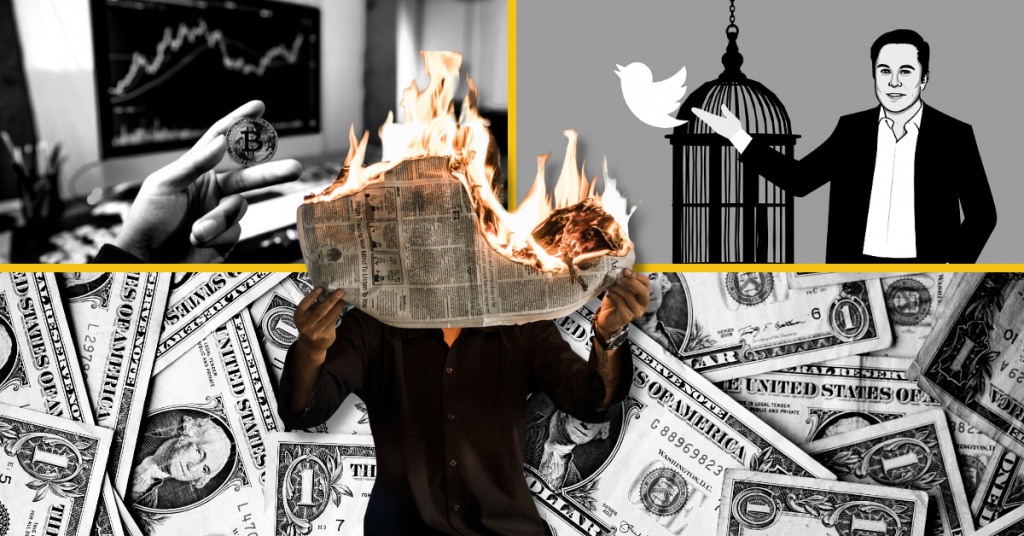 Tell us what you really think

Much criticism has been proffered in the direction of the cryptocurrency world this year, though few have produced a takedown as scathing as Financial Times columnist Jemima Kelly.

Having spent years calling out “the steaming pile of horse manure that is crypto”, Kelly suggested in her FT column this week that 2022 has shown the sector to be even more corrupt and dangerous than she previously thought.

“In many ways, I have been shocked myself at what has happened in the world of crypto over the past year,” Kelly wrote. “It has proved itself more shameless, dishonest, interconnected and fantasy-based than even its strongest critics could have imagined.”

Kelly goes on to list a handful of things we’ve learnt from the world of crypto this year, including the fact that the ecosystem has been propped up by a lot more leverage than many realised.

“And this was borrowing in real money, not just the magical strings of 1s and 0s that crypto tokens consist of,” Kelly pointed out.

The result of that was widespread chaos and collapse amid rising interest rates this year, leaving crypto prices tanking and platforms such as Celsius and Voyager failing to hold it together.

The past 12 months have also taught us that the world of cryptocurrency isn’t nearly as decentralised as its biggest supporters would have you believe.

“2022 was the year that we found out the extent to which Big Crypto is a real thing: a cartel of interconnected players from exchanges, stablecoin companies and crypto networks who work together via group chats – one Signal chat was reportedly called “exchange co-ordination” and included executives from FTX, Binance and Tether,” Kelly said.

Kelly then pointed out the ‘smoke and mirrors’ effect of the crypto world in recent years.

Martin Walker of the Center For Evidence-Based Management, a longtime crypto critic, told her, the books of crypto exchanges “are filled with their and their friends’ nonsense tokens”, and that when one of these implodes, “whole chunks of industry can very rapidly disappear”.

In spite of all the criticism – of which there has been plenty this year – the biggest takeaway for Kelly was ultimately the sector’s resilience.

Regardless of collapsing exchanges and the falling value of the tokens themselves, “many people are still willing to suspend disbelief, clinging on to the hope that one day, their miraculous internet money might resume its trajectory to the moon.”

Crypto investors will no doubt be hoping for their coins to lift off once again in 2023. Will Kelly be left with egg on her face?

Going on a bear hunt

According to a new Reuters article, investors in US stocks and shares are currently bracing themselves for an expected recession in 2023.

That is largely the result of aggressive monetary policy adopted by the Federal Reserve this year, in an attempt to curb the impact of rapidly rising inflation.

While inflation continues to run rampant, investors are now shifting their focus to the potential consequence of recent Fed rate hikes; the prospect of an economic slowdown in 2023.

Fund managers responding to a survey by BofA Global Research named a deep global recession and persistently high inflation as the biggest risks in the market for next year, with a net 68% forecasting a downturn as ‘likely’ in the next 12 months.

“The consensus is pretty clear that there is going to be a recession in 2023,” said Chuck Carlson, CEO of Horizon Investment Services. “The issue is how much has the market already discounted a recession, and that’s where it gets a little bit thornier.”

Ed Clissold, chief US strategist at Ned Davis Research, added: “If we’re not in a recession now but we’re going into one that would mean that a retest of the October [share price] lows and a break of them is quite possible in the first half of the year.”

Investors are also now working to gauge the degree to which slowing growth has already been factored into corporate earnings.

Consensus analyst estimates suggest a 5% rise in S&P 500 earnings next year, according to Reuters, with at least slim year-over-year growth expected in every quarter.

Earnings fall by an average annual rate of 24% during a recession, however, meaning there is still plenty of risk under current market conditions.

In spite of this, strategists polled by Reuters last month said they expected the S&P 500 to end 2023 around 10% ahead of current levels.

“One way that could happen is if a recession hits early in 2023 and ends quickly. Bear markets on average have bottomed four months before the end of a recession,” the article said.

If there is a bear market on the horizon, the global economy will at least be hoping that it isn’t too grizzly.

Self-appointed Saviour of the World Elon Musk hit the headlines again this week – or more accurately, continued to hit the headlines – as he performed what was likely considered by his critics to be his biggest and most public self-own.

After asking Twitter users if he should stand down as head of the social media giant following his acquisition of the platform earlier this year (and promising to abide by the results of the poll), 57.5% of respondents suggested Musk should be relieved of his Twitterly duties.

After the poll closed, Musk promised users on the site: “I will resign as CEO as soon as I find someone foolish enough to take the job! After that, I will just run the software & servers teams.”

BBC News pointed to several possible causes for Twitter users turning against the mogul – though this will come as no surprise to regular users of the platform, who have seen no shortage of criticism aimed at the South African-born space explorer in recent weeks.

I will resign as CEO as soon as I find someone foolish enough to take the job! After that, I will just run the software & servers teams.

From charging users for Twitter’s ubiquitous blue ticks to removing journalists from the platform, the court of public opinion has brought a litany of charges against Musk since he took control of the site.

Even the United Nations and European Union got in on the action, with the UN tweeting that media freedom was “not a toy” and the EU threatening Twitter with sanctions.

One thing which could cool off criticism of the platform is the prospect of new management. After the poll closed, however, Musk responded saying that “No one wants the job who can actually keep Twitter alive. There is no successor.”

Indeed, BBC News agreed with his assessment that a replacement will not be easy to come by.

Some have speculated that Twitter’s co-founder and erstwhile CEO Jack Dorsey could re-enter the fray, while other names, such as former Facebook COO Sheryl Sandberg, engineer Sriram Krishnan and Donald Trump’s son-in-law Jared Kushner have been mentioned. Heaven forbid.

At first glance, this does not appear to be a list completely free from the possibility of creating further controversy.

Musk will soon need to find time to focus on his role as Tesla CEO, however, as investors in the car manufacturer appear to be losing patience with the uncertainty created by his foray into the world of social media.

Shares in Tesla have tanked by some 69% this year-to-date, a number which is likely to amuse ‘edgelord’ Musk. His investors won’t be laughing, however. As for the value of Twitter at this point, that’s anybody’s guess.