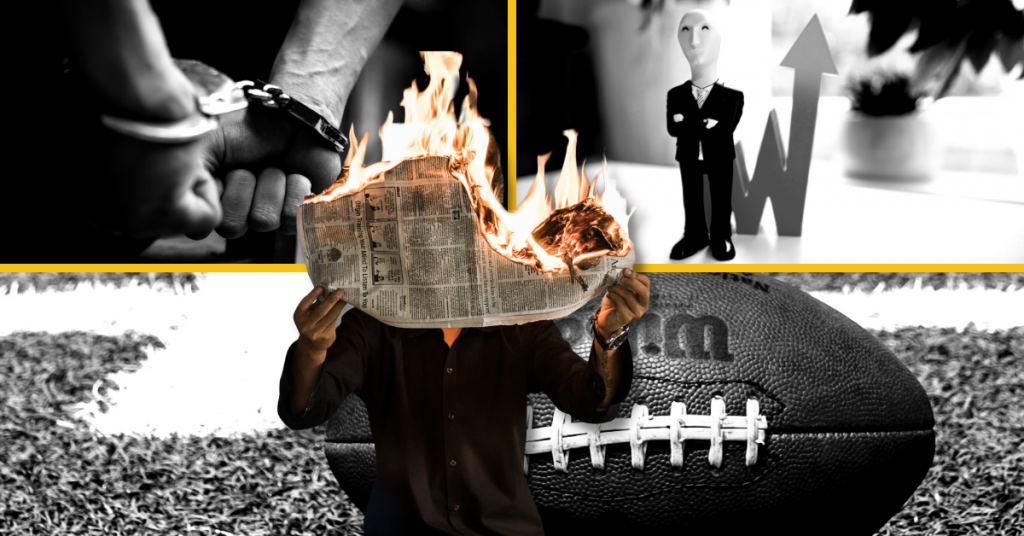 Going overboard on the underdog

ESPN published a story this week on a wager which recently sent the sports betting Twittersphere into a virtual meltdown.

The story begins with a New Jersey restaurant owner and a former Goldman Sachs trader talking bets at a Russian-style bathhouse.

According to the article, hungover restaurateur Robert Doran was waxing lyrical to bathhouse owner and former financial trader Pete Kizenko about a bet tip he’d received the night before.

Doran told Kizenko that a number of former Michigan athletes had been at the wedding he attended the previous night, and were talking up a team from the Mountain West as a sleeper for the next college football season.

Kizenko, a betting enthusiast and no stranger to taking the longshot, didn’t hesitate. After checking the odds on a tournament victory for the Utah State Aggies (who ranked 24th in the final Associated Press top 25 rankings in 2021), he said: “F— it! Let’s hammer the national championship. They’re 1,000/1.”

While placing bets on wide outsiders is nothing new in the betting world, Kizenko’s $1,000 stake – worth a million-dollar payout if the bet comes in – left the Caesars Sportsbook team scratching their heads.

According to the article, several veteran bookmakers struggled to recall ever taking a four-figure bet on a team with 1,000/1 odds or longer.

After tweets showing the bet went somewhat viral on Twitter, other punters wanted to get in on the action and Caesars found itself taking another $1,000 bet on the Utah underdog within a few days, and as of mid-July, the Aggies had attracted more national championship bets of $1,000 or more at Caesars than any other team, except Alabama and Ohio State, the two consensus favorites.

Doran clearly liked the idea that his tip had contributed to messing with the bookies’ heads. “It’s funny, because you had everybody thinking that these smart people are doing crazy research on Utah State and that it’s some like hidden Messiah golden pick,” he said.

“And really, it just came from me ripping tequila shots with some players at a wedding.”

While the odds remain slim, one thing’s for sure; if Kizenko’s bet comes in, Doran can be sure there’s a lot more tequila where that came from.

All hail the meme stock king

Speaking of outlandish bets, the Financial Times this week shared the story behind Jake Freeman, the 20-year-old student who was able to amass a $110m fortune by investing in beleaguered US retailer Bed Bath and Beyond.

Shares in the bed and bathroom specialist have tanked from a 52-week high of $34.61 to as little as $4.39 this year, making it a prime target to become a so-called ‘meme stock’ – a term used for stocks whose prices are inflated by an online community of aggressive retail investors looking to extract as much value as they can from the market (remember GameStop, anyone?)

The hordes of investors jumping in on these shares cause massive volatility, allowing the savviest investors to make huge returns in short spaces of time.

Jake Freeman recently offloaded a 6% stake in Bed Bath and Beyond at a price of around $27 per share. He bought those shares a few weeks earlier for under $5.50.

This almost 5x return generated an extraordinary $110m fortune from the young investor, who as it turns out had been furnished with $27m of capital to invest – hardly a rags-to-riches story, then.

Speaking to the FT, Freeman declined to disclose the names of his investors, citing confidentiality agreements, but said he had tapped friends, family and other people in his orbit.

As it turns out, Freeman is something of a mathematics whizz, and is no stranger to the world of investment having interned at New Jersey-based Volaris Capital Management under the mentorship of its founder Vivek Kapoor – who, by the way, said he was not involved in the Bed Bath trade.

The now set-for-life young man had been trading alongside his uncle Scott since the age of 13, apparently, and had what he described as “substantial” support from his parents.

After researching ailing retailers to identify his next big opportunity earlier this year, Freeman had settled on Bed Bath and Beyond and was surprised to see prices begin to surge once again in August.

“[People] were really hyping it up on [Reddit discussion board] WallStreetBets, which just led to more and more fear of missing out,” he said.

And he got the timing just right. The day after he liquidated his 6% stake, the value of shares plunged from $27 and are now worth less than $11 each.

Once again, the market is reminded: never underestimate the power of a determined online community.

Investors themselves, however, should also be reminded: try to avoid getting caught up in online FOMO. When it comes to meme stocks, what goes up must come down.

From bets on criminally long odds, to actual criminal activity, this week Coingeek reported on an investigation taking place in India against the co-founder of cryptocurrency Ponzi scheme BitConnect.

Police in the Indian city of Pune have launched an investigation against Satish Kumbhani, who is now wanted in the country following a complaint from an investor about a missing BTC investment.

According to a report by local news outlet the Indian Express, the investor said he lost nearly 220 bitcoins (more than $5m) through several investment platforms operated by Kumbhani and six others between 2016 and 2021. This amount includes his initial investment of 54 bitcoins and reinvestment of 166 bitcoins earned as returns.

Authorities have been unable to local Kumbhani since he was indicted by the SEC for charges relating to his BitConnect activities, which ceased in 2018.

According to US authorities, the platform fraudulently raised $2.4bn by misleading investors. In February this year, Kumbhani was indicted by the Department of Justice on charges of wire fraud, conspiracy to commit commodity price manipulation, and international money laundering.

According to Coingeek, he will face up to 70 years of jail time if found guilty of all the charges.