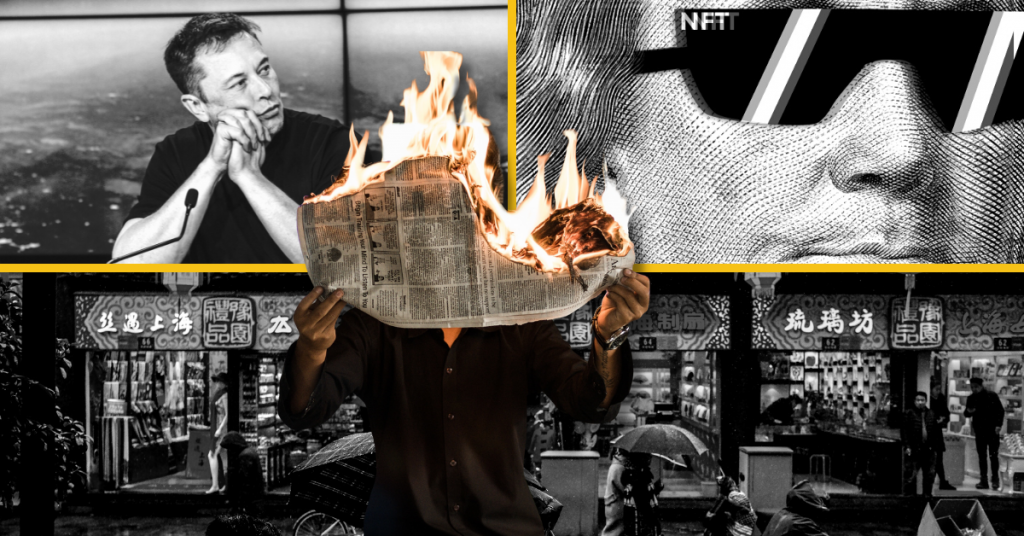 Bloomberg was among the first publications to provide commentary of Elon Musk’s impending $44bn takeover of Twitter this week.

The Tesla chief wasted no time in stamping his authority on his newly acquired social network by firing several of Twitter’s influential and long-serving leadership team.

Among the casualties, according to Bloomberg, was Vijaya Gadde, Twitter’s head of legal, policy and trust – also known as the person responsible for Donald Trump’s permanent ban from the platform.

CEO Parag Agrawal was also let go as Musk gets ready to transform the social network into a private company in his own vision, as alarming as that might be for some.

The South African has said he wants to allow free speech on Twitter, which is likely to mean laxer content moderation standards and the return to Twitter of previously blacklisted accounts and personalities, including the likes of Trump and Katie Hopkins.

“As the deadline neared, Musk began putting his stamp on the company, posting a video of himself walking into the headquarters and changing his profile descriptor on the platform he now owns to Chief Twit,” wrote Bloomberg.

Further cost-cutting at Twitter is expected over the coming months, although Musk has allayed fears that he could be about to sack 75% of the company’s overall workforce.

Will he stick to his word? Only time will tell.

US tells metaverse NFT casino to shut up shop

Interpol today (28 October) warned that scams might be operating differently in the virtual world. So, here’s a metaverse crime story for you.

Based in Georgia, Slotie is a virtual metaverse-styled NFT casino where players can interact with each other, make purchases and gamble with NFT products.

According to the report, the order alleged that Sloties violated state securities laws and illegally and fraudulently sold Slotie NFTs.

The regulators further accused Slotie of withholding information from investors about its assets and liabilities, anticipated use of capital and key risks associated with NFTs and the metaverse generally.

The report highlighted that although US state regulators didn’t have jurisdiction in a foreign country, their cease-and-desist orders had the effect of shutting down the market for the Slotie NFTs.

This is because websites and marketplaces where they were sold would delist the products after intervention from US regulators.

Next, the author quoted the North American Securities Administration Association, which in August had warned investors over “dangers lurking in the metaverse”.

Amanda Senn, deputy director of the Alabama Securities Commission, said: “Companies operating exclusively online that are seeking to raise money from our investing public are not exempted from the law. States are hard at work ferreting out and fighting fraud.”

The challenge for regulators, the report concluded, was that the metaverse is “the shiny new online object that’s drawing curious users, as well as those who want to take advantage of them”.

Be on high alert if you plan to patrol the metaverse in the near future.

Mirror, mirror, on the (Great) Wall

This week, Business Insider exposed just how apparently easy it is for online gambling operators to circumvent digital restrictions in black markets such as China using the widespread phenomenon of ‘mirror’ websites.

These, the article explained, are operator websites offering their whole suite of products, just as they would in licensed jurisdictions, with the only difference being ever-changing URLs to circumvent government blocks on original domains.

Speaking to one Chinese gambling player called Huang (a false name used to protect his identity), BI reported that gamblers in the country – where the practice is explicitly outlawed – often do not even need a VPN to access gambling sites from China.

His own particular operator of choice – Stoke-on-Trent based industry giant bet365 – apparently had 59 operational mirror sites operated by its subsidiaries, which were uncovered by Business Insider in June.

When each one is identified and blocked by the Chinese government, a new one pops up in its place. “It’s a game of whack-a-mole,” said Ben Lee, managing partner of IGamiX Management and Consulting in Macau.

While it’s impossible to know just how much is being wagered through these websites in the country, a report from the Asian Racing Federation in 2019 estimated that some $54bn was flowing out of the country to offshore gambling operators.

Although it appears easy for Chinese residents to access online gambling, doing so does not come without risks.

Huang, the customer BI spoke with, said his account with the operator had been frozen in May, after which the firm asked him to provide proof of funds.

Fearing the repercussions of taking his case to the authorities – gambling online can carry with it a prison sentence in China – Huang is reportedly unable to recover the $37,000 still sitting in his account. “This is all my savings,” he told BI.

For what it’s worth, bet365 said it does not believe operating in China is illegal and that the operator is licensed by “relevant regulatory authorities across a variety of jurisdictions and is compliant with all applicable legislation.”

While that may well be true, the article went on to shed some light on shady-sounding areas of gambling marketing in China.