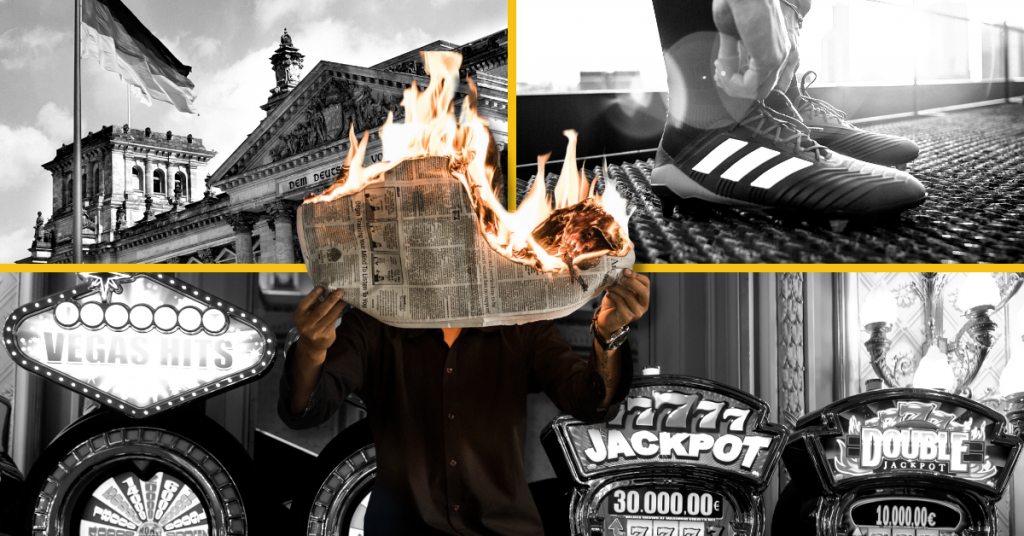 BBC Sport this week published the story of League One football team Forest Green Rovers throwing its support behind Gambling with Lives’ ‘The Big Step’ campaign to eradicate gambling sponsorship and advertising in sports.

Gambling with Lives is a charity established in 2018 by families bereaved by gambling-related suicide.

It campaigns to make gambling safer by advocating for limits on high-risk products, stringent affordability checks and a statutory levy on the industry to pay for research, education and treatment, in addition to its The Big Step campaign to end gambling advertising, sponsorship and inducements.

Forest Green Rovers is the latest professional football club to show its support for the organisation, which it will do by having its players wear yellow laces – the same colour as Gambling with Lives’ branding – at their FA Cup first-round tie away at South Shields on Saturday.

Club owner Dale Vince told BBC Sport that the presence of gambling in the world of football “is uncontrolled, quite frankly, it’s running away. I’m hoping that the majority of our boys will wear yellow laces and we’ll make a bit of a statement,” he said.

“People, I think, are generally unaware of the harm that gambling causes. It can cause suicides, people lose their homes, lose their families, and advertising of gambling is unregulated in football.

“It’s put in front of a young audience, and older people as well. Gambling is super addictive, and it’s hyper normalised by football because it’s prevalent across Premier League games on TV. It’s all about encouraging people to gamble and there’s something wrong with that.”

According to the article, several players wearing the laces this weekend have personal experience of gambling addiction, including Lewis Carey, who plays for Lewes FC.

He said: “It’s important that footballers like me do what we can to be positive examples to young people, and that must mean we aren’t forced to be billboards for gambling, nor play in stadiums that promote this product that destroyed my life.”

While UK trade group the Betting and Gaming Council provided some contrary remarks to BBC Sport and defended the state of gambling advertising around sport in the country, it seems that more and more clubs are throwing their support behind the removal of this kind of marketing.

In other safer gambling news, the Sydney Morning Herald published an article today (4 November) all about Eddie – a gambling addict business owner in Sydney who says gambling firms have continued targeting him despite his requests for self-exclusion.

After abstaining from gambling for some 18 months amid Covid-related lockdowns in Australia, Eddie told the Herald: “The pokies are definitely my kryptonite. Every single pub in Sydney is just full of poker machines.

“I slipped up on Melbourne Cup day. I went for a couple of beers and was with the wrong crowd. I lost about A$2,500 betting and won nothing,” he told the paper.

Having lost an estimated A$300,000 through gambling over the last nine years, Eddie put himself on a self-exclusion list several years ago in an attempt to curb his harmful behaviour.

Since then though, he said, only one pub has stopped him from gambling on its land-based poker machines – a ubiquitous element of Australian gambling culture.

“There have been other clubs where you walk straight through,” he told the Herald. “I don’t think the staff pay attention.”

Eddie told the paper he would support the introduction of a more effective system for self-exclusion, such as the use of a cashless card to use poker machines, linked to the customer’s ID to prevent self-excluded players being able to use them.

Another option could be facial recognition technology, which could help venues to identify self-excluded players.

Chief advocate for the Alliance for Gambling Reform, Tim Costello, supports only one of those ideas. He told the Herald: “Giving [gambling operators] facial recognition is putting Dracula in charge of the blood bank. They already know who is self-excluded.

“I think we need a national self-exclusion register, and we need an independent national regulator to stop problem gamblers going from one [venue] to another.

“The cashless card is the reform we have to have. It is 100% visibility and means criminals will never launder money again because they will have to show their ID. It requires a punter to show if they are self-excluded immediately.”

Indeed, if Eddie’s story is anything to go by, it seems Australia’s self-exclusion systems are in need of some further attention to make sure they really work for the most vulnerable.

They say imitation is the greatest form of flattery, and if that’s the case, iGaming NEXT should be feeling like the belle of the ball this week.

On Monday, German newspaper Handelsblatt published a story exploring a similar theme to one released in this publication back in August – namely the raising of several eyebrows in response to the dominance of a pair of companies in Germany’s online gambling market.

The piece offers up a brief history of gambling in Germany, from land-based slot machines “relegated to poorly lit locations near train stations,” to the now-regulated online market which allows German residents to legally gamble from the comfort of their own homes.

The piece pointed out – as iGaming NEXT did in August – that seven of the 13 (then 11) brands allowed to offer online slots in the country are owned and operated by one of a pair of industry stalwarts – either the Gauselmann Group or Novomatic.

Industry experts told the paper that those two businesses had secured a significant advantage over their competitors by securing early access to the market, while one of those competitors said: “That makes you suspicious.”

While both Gauselmann and Novomatic have defended their positions – insisting that the licence process is intended to create the same competitive opportunities for all businesses in the sector – eyebrows were raised once again by stories of corruption and backhanders from several years ago.

Reports that Novomatic owner Johann Graf gave away some €30m in gifts to board members, supervisory boards and lawyers for the business have been repeatedly refuted by Graf and his lawyer.

Gauselmann, meanwhile, has been accused of making more than €1m in political donations under the radar, by packaging them as smaller payments under the €10,000 threshold by which donations are not required by law to be reported.

Whether true or not, the article points to Germany’s incoming gambling regulator – the “Common Gaming Authority of the States” (GGL) – taking over from the state administration office in Saxony-Anhalt as the industry’s supervisor as a potential positive for increased oversight of the market.

In its battle against offshore, unregulated operators, the GGL is prepared to “take the fight against illegal gambling to a new level”, according to the piece.

The new regulator has the power to stop payments or order network blocks. “This will allow GGL to take more effective action against providers in the future.”

What impact the extended powers will have upon licensing – and whether Gauselmann and Novomatic may begin to lose their grip – remains to be seen.