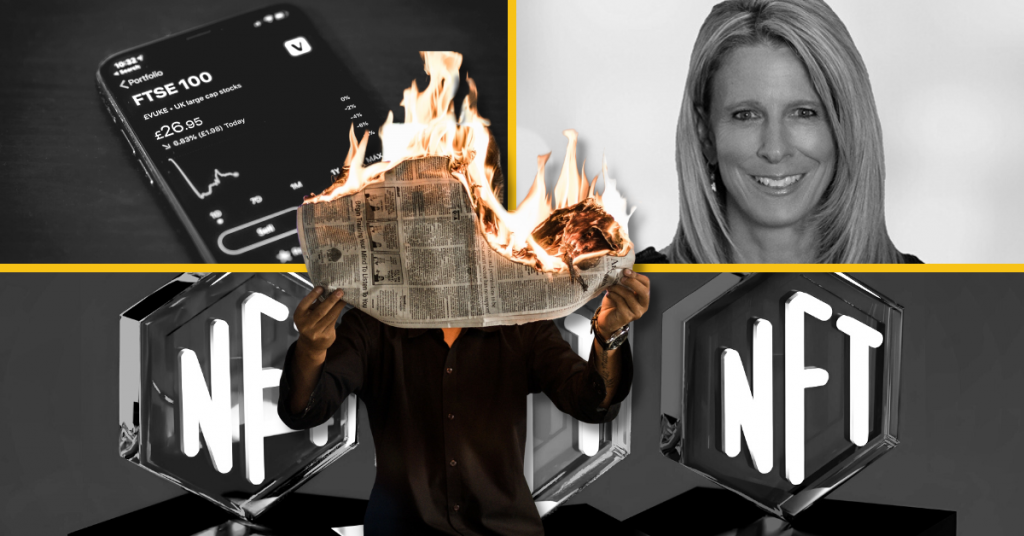 Investors who got caught up in (the now-renowned mug’s game of) NFT trading over the past couple of years may yet find some value in their newly worthless digital assets, after all.

An article published recently in the Guardian shed light on a new service set up by non-fungible enthusiasts, which is offering to buy up worthless NFTs from their owners at a penny a go, allowing individuals to register their losses on the assets and write them off against their tax bills.

The aptly named platform, Unsellable, allows investors to sell up to 500 NFTs at a time, according to its Twitter bio, and currently holds a collection of around 5,000 items according to the Guardian.

That number is expected to grow to 15,000 in the near future, as ever more scorned investors try to figure out what to do with the pixelated images of monkeys which, inexplicably, nobody seems to want to pay a million dollars for any more.

For the sake of clarity, it should be pointed out that Unsellable is not hoarding the assets in the hope of a genuine turnaround in their value.

Unsellable founder Skyler Hallgren said the digital collectibles “are an interesting artefact of a period of time in the market,” but are “likely to continue to be worthless.”

A visit to the firm’s website offers some clues into how it plans to make money by spending money.

Consultations are set at the princely sum of $295 for 30 minutes.

While the NFT market collapsed in flames in quite spectacular fashion, it appears there are now at least some ways for businesses and investors to capitalise on its demise.

Your loss is Neal Berger’s gain

According to a profile in Bloomberg, the fund launched in 2021 to capitalise on Berger’s decades of experience running hedge funds in New York.

After launching, the firm “loaded up on bets that the Federal Reserve would unwind a decade of stimulus,” Bloomberg said, shorting American and European assets as well as Japanese bonds.

“The zebra being the ocean of liquidity, first in response to the Great Financial Crisis and then to Covid.”

Obscure safari metaphors aside, Berger was right to put his money where his mouth was, as the fund’s value soared 163% in 2022 as the price of different assets collapsed rapidly.

Elucidating his strategy somewhat more clearly, he told Bloomberg: “The reason why I started the fund was that central bank flows were going to change 180 degrees. That key difference would be a headwind on all asset prices. One had to believe that the prices we saw were, to use the academic term, wackadoodle.”

While Berger is likely not the only fund manager to have thought this, he continues to double down on his opinion.

He plans to hold his short positions for years, suggesting further doom and gloom for the economy if his predictions turn out to be right.

“You have your variations, your rallies day-to-day, month-to-month. But big picture, everything is going down. Price action is ultimately the bible,” Berger concluded.

Well, investors, hold onto your hats. You have been warned.

Howe does she do it?

A Business Insider profile on FanDuel CEO Amy Howe suggested she has been directly responsible for the brand’s impressive growth in recent years and for helping it to become the first US online sports betting operator to declare a profit in the country.

To achieve that, Howe is focused rigorously on the firm’s bottom line, BI said, while also holding the creativity to make savvy business moves.

“Howe has managed to strike a delicate balance between continually reinvesting in the business while also recognising that the market is calling for profitability,” said Chris Grove, partner emeritus at Eilers & Krejcik Gaming.

“That’s an intricate waltz and she is managing it to perfection,” he added.

As the only female CEO of a major US sportsbook operator, Howe has also led the charge to encourage more women to wager on sports, bolstering the size of FanDuel’s customer base as a result.

The market of women bettors is an “untapped opportunity,” Howe has said previously, adding that: “By no means have we cracked the code on this, but I think supporting female athletes and advocating for equity with female athletes is really important.”

Grove went on to suggest to BI that Howe “could have come into FanDuel and said, ‘I want to do things my way,’ but instead she looked around at the market, talked to consumers, and listened to her internal team.”

“By virtue of her humility, she’s been able to blend those competing perspectives into a coherent and successful vision for the company.”

Whatever the determining factors in Howe’s success, shareholders in FanDuel owner Flutter Entertainment will certainly be hoping she keeps up the performance long into the future.