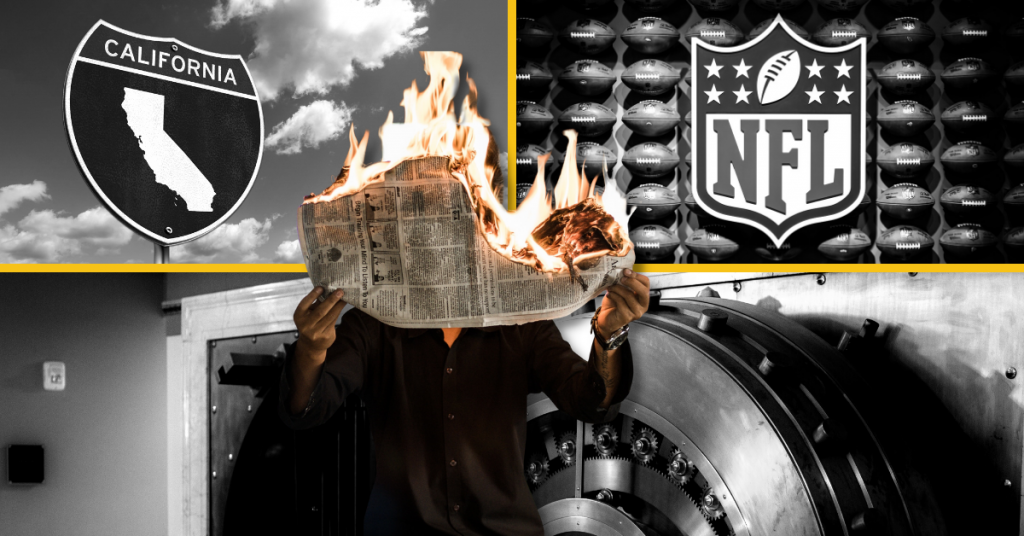 A piece from Insider revealed this week that FanDuel co-founders Nigel Eccles and Rob Jones are on a mission to make NFTs more accessible to a broader base of fans, by simplifying the purchasing process for customers.

The platform also allows creators to curate exclusive content from music and videos, which will be stored in ‘vaults’. And the keys to the vaults? Why, they’re NFTs, of course!

Chief executive and co-founder Eccles said “NFTs are an incredible unlock for artists and professional athletes – but the experience sucks for fans.”

While users will be able to pay for keys via in-app purchases with Apple Pay, or credit card via the mobile app on iOS or Android, it remains to be seen whether Vault will be able to make the NFT experience suck less.

NFL grows and shows its Genius

A story from Sportico pointed out that with 4.25m warrants in Genius Sports vesting last week, the NFL has become the firm’s largest US-based shareholder and fourth largest owner of equity in the business overall, controlling around 7.7% of its voting rights.

The vesting of this latest set of warrants took the NFL ahead of New York mutual fund giant Fred Alger Management as the largest US-based shareholder in the firm.

Although the NFL doesn’t technically own any part of Genius, since all of its investment is made through warrants, the distinction is academic, Sportico said, as the shares can be acquired immediately.

After striking a deal which made Genius the sole gatekeeper of NFL data last year, the league immediately received 11.25m exercisable warrants in the company, and a further tranche of 4.25m became exercisable under the agreement last week.

Sportico pointed out that it is becoming increasingly common for sports leagues to get some skin in the gambling game. The NBA and NHL own $127m and $18m worth of Sportradar stock, respectively, for example.

“The leagues getting equity in these data providers is probably the best way for them to generate immediate value for their data,” explained Jed Kelly, senior equity analyst at brokerage firm Oppenheimer & Co.

A golden age of betting in the Golden State?

Politico, meanwhile, put out a report on the upcoming potential for California to legalise sports betting, in a move that would have a huge impact on businesses throughout the US gaming industry and beyond.

In November this year, it said, voters in the US’ most populous state will be given the opportunity to open the floodgates to legalised sports betting, although no shortage of obstacles stands in the way.

The state is “mired in longstanding gambling divisions that already blunted legalisation efforts nearly two years ago,” the piece points out, and legalisation would lead to a battle which pits US market giants such as DraftKings and FanDuel against incumbent tribal casinos, racetrack operators and card rooms.

It’s the control over online betting, naturally, that will be the most contentious issue for the different sides vying for position. If legalised, California’s sports betting market is expected to become the most lucrative in the world, according to Daniel Wallach, a Florida-based attorney who has advised various players in burgeoning sports wagering states.

It should come as no surprise then that the market will be hotly contended if a popular vote goes through in November.