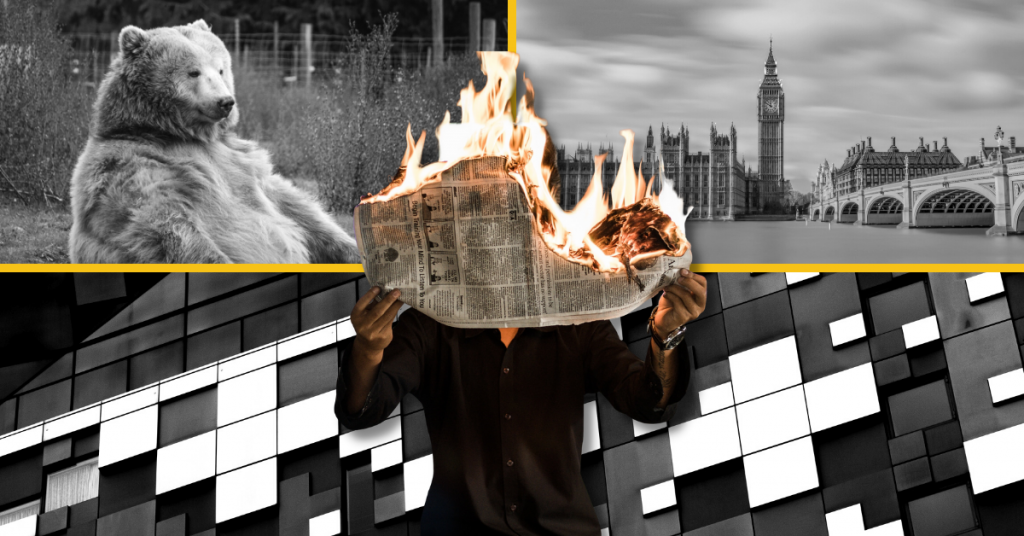 Going on a bear hunt?

BBC News gave us a round-up of downturns taking place across stock markets globally this week, after the US central bank announced its biggest interest rate hike in 22 years.

“Hong Kong’s benchmark Hang Seng index fell by 3.8%, while shares on the Shanghai Stock Exchange were down by 2.2%. Australia’s ASX 200 closed 2.2% lower.

“Those falls followed the Dow index, which includes big names such as Apple and Nike, sliding on Thursday by more than 1,000 points to end 3.1% lower. The wider S&P 500 fell 3.6%, while the tech-heavy Nasdaq plummeted by almost 5%,” the piece explained.

Other macroeconomic factors, including Russia’s invasion of Ukraine, are thought to be having an additional impact, as the increase in energy prices as a result of the conflict continues to weigh upon the wallets of individuals around the globe.

And the effects could still be far from over. US government figures released this month showed the country’s economy contracted by 1.4% during the first quarter of 2022.

The latest tumbles in share prices have left a big gap between where markets were in January and where they are today. Since the beginning of the year, the Dow is down almost 10%, while the S&P 500 has dropped by 13%, and the Nasdaq has collapsed by 22%.

For those hoping to capitalise on bargain stocks as markets continue to fall, Forbes brought us the following word of warning from Jim Stack, founder and president of InvesTech Research.

“The one thing you learn in a bear market is that forecasting the bottom is like catching a falling pitchfork. It’s a spectacular feat if you pull it off, but it’s painful and dangerous to try.

“One of the dangers in anticipating a bottom lies an understanding that the showdown between Fed policy and inflation is just beginning.”

Hoping for a five star review

The Racing Post got stuck into UK gambling regulation this week, with a piece on Betting and Gaming Council (BGC) chief executive Michael Dugher’s demand for an evidence-based approach to the Gambling Act review currently taking place.

Dugher argues that the review should be carefully balanced, after research found that the rate of problem gambling in the UK had decreased from 0.4% of the population to 0.2%.

“These latest figures showing that problem gambling is falling once again will no doubt come as a profound disappointment to anti-gambling prohibitionists,” Dugher said.

“It should be a warning to ministers to ensure future changes are carefully balanced, proportionate and targeted.

“They are further evidence of that positive progress and underline our calls for ministers to take a genuinely evidence-based approach to the upcoming white paper and not pander to the anti-gambling lobby.”

Dugher also insisted that the majority of gamblers in the UK do so responsibly, and warned that any significant affordability checks could lead them to bet with unlicensed black market bookies.

Bally’s adds a big plus to its portfolio

Bally’s is set to become the latest big gaming firm to traverse the division between the gambling, sports and media industries, with the upcoming launch of its new sports streaming service, Bally Sports+.

Sportico put out a piece this week explaining that the streaming service, built on the Bally Sports regional network brand, is expected to soft launch next month, with access costing $188.99 per year or $19.99 per month.

“The initial launch will enable the validation of the quality and reliability of the product prior to the full DTC rollout of the Bally Sports Regional Sport Networks planned for September,” said Sinclair Broadcasting Group CEO Chris Ripley.

“In the months after launch, we expect to roll out an enhanced DTC product incorporating additional functionality, content and features, with incremental ways to monetise the viewer through a more personalised, interactive experience.”

As you might have guessed, that likely means the addition of gambling functionality is becoming increasingly likely in the world of sports streaming.