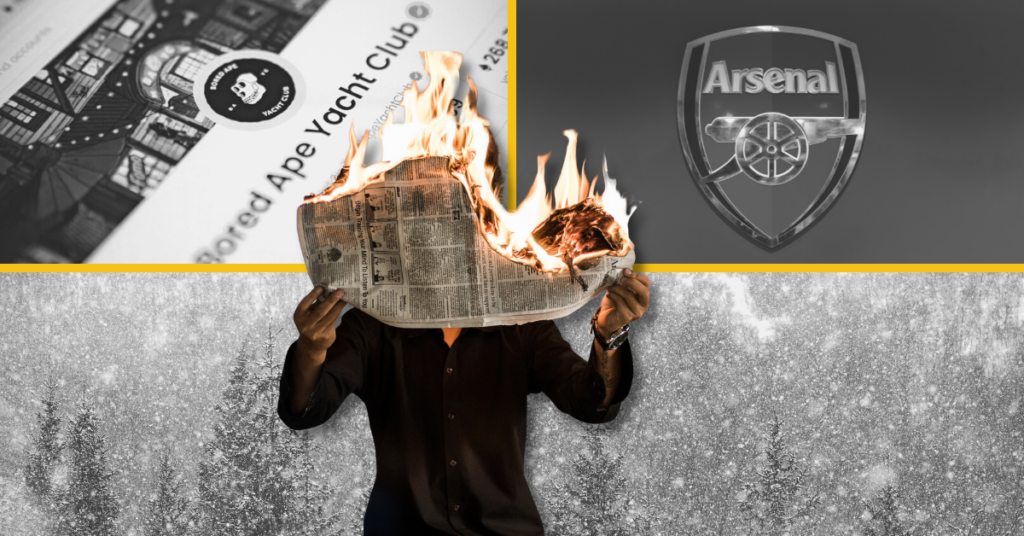 Microsoft caught our eye and, well, the eyes of the rest of the world this week, as the Wall Street Journal broke the news that the software giant had agreed to buy video game developer Activision Blizzard in a deal worth somewhere in the region of $75bn.

After adjusting for Activision’s net cash — that is to say, $7bn in debt — Microsoft said the deal is valued at $68.7bn.

The WSJ reported that Activision’s long-time CEO Bobby Kotick is expected to leave the business after the deal closes, despite Microsoft’s claim that he would continue to serve at the helm of the business.

The deal marks Microsoft’s biggest ever acquisition by some margin, well ahead of the $26.2bn it paid for LinkedIn in 2016, its second biggest purchase, which is followed in the rankings by a $16bn deal for conversational AI specialist Nuance Communications in 2021, and the $8.5bn it paid for Skype back in 2011.

Facebook ain’t fungible: Meta to take a slice of the NFT action

According to the Financial Times, Meta-owned social media giants Facebook and Instagram are exploring plans to allow their users to make, showcase, and sell NFTs on the platforms.

Teams are currently preparing to launch a feature that will allow users to display their NFTs on their social media profiles, according to the report, while working on a prototype add-on to help users mint their own collectible tokens.

Meta has also discussed launching a marketplace to allow users to buy and sell the digital assets, too, according to the insider connections who spoke to the FT.

Apparently, Facebook’s digital currency wallet Novi, which launched as a pilot in the last quarter of last year, is likely to be central to Meta’s NFT objectives, with a lot of its supporting functionality used to power the yet-to-be-seen features.

Twitter threw its hat into the NFT ring this week too, as CoinDesk reported the platform had launched an official verification mechanism for NFT profile pictures.

Anyone attempting to steal your blockchain-registered asset will be easy to spot, then, as their worthless copy of the picture will appear in the classic circular shape. That’ll teach ‘em!

The ugly side of the beautiful game

The Athletic reported this week that the Football Association (FA) had opened an investigation into suspicious betting activity surrounding the award of a yellow card to an Arsenal player during a Premier League match this season.

Apparently, bookies alerted football’s governing body to unusual betting patterns after the match in question, during which a Gunner was given an official warning by the ref. It has not yet been confirmed which offence led to the booking, or for who.

According to sources, an “unusual” amount of money was placed on the particular player being given a yellow card during the match. Helpfully, the notoriously loose-lipped FA told The Athletic: “The FA is aware of the matter in question and is looking into it.”

While it’s hard to get a word in edgeways around rambling statements like that, previous high-profile cases of so-called ‘spot betting’ have led to top-tier players being banned from professional football in the past.

In 2018, Lincoln City right-back Bradley Wood was banned from playing for six years, after he was found guilty of intentionally receiving yellow cards during the team’s FA Cup run.

This is what Xhaka was booked for on the 86th minute mark against Leeds.

According to speculation on Twitter, Swiss-born Granit Xhaka could be the key to solving this mystery, as users took to the social media platform to share videos of his yellow card against Leeds United on 18 December last year.

Xhaka, who is currently serving a suspension for another red card he received against Liverpool at Anfield, was booked in the 88th minute for time-wasting, despite Arsenal leading 4-1 against the West Yorkshire club.