July Online Game Report: Evolution tops the ranks for US supplier revenue with 29.3% of overall GGR 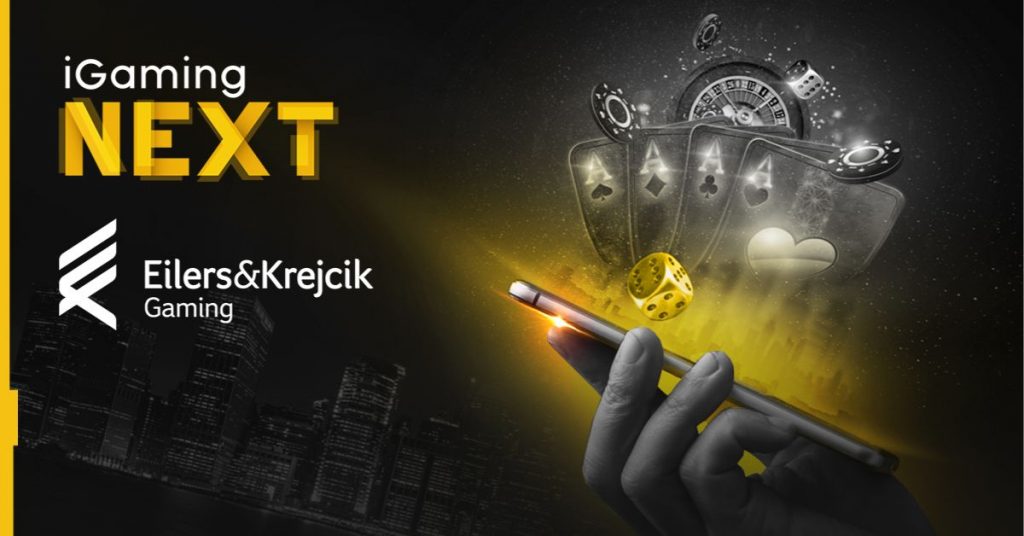 Below are some of the latest standout market figures, through to June 2022, presented in partnership with iGaming NEXT. 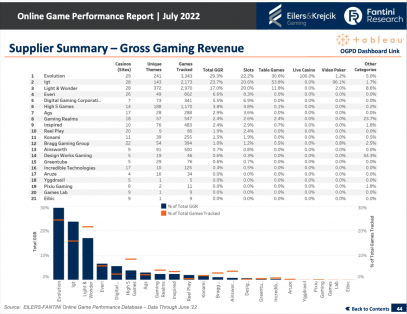 Looking at iGaming suppliers by revenue, it becomes clear that the market is dominated by a small number of well established businesses. The top three ranked suppliers – Evolution, IGT and Light & Wonder – accounted for 70% of overall iGaming GGR between them.

Live casino giant Evolution led the charge here, generating 29.3% of total GGR among suppliers included in the report. In addition to being the largest supplier overall by GGR, Evolution accounted for 100% of all live casino GGR analysed by Eilers & Krejcik, but was the only live supplier in the data set.

Despite its core focus on live casino, with the vertical making up 79% of Evolution’s Q1 2022 revenue, the Stockholm-listed company was also the largest slots supplier in the report, accounting for 22.2% of all US online slot revenue. It also brought in 30.6% of overall online table game revenue.

Meanwhile, IGT was the second largest supplier, generating 23.7% of total GGR, while marking itself out as the clear leader in the table games space, where it accounted for 53.8% of GGR. In slots, IGT sat just behind Evolution, at 20.6%.

The two next largest suppliers in the market – Everi and Digital Gaming Corporation – brought in 6.6% and 5.5% of total GGR respectively, meaning the top five market suppliers (of the 21 businesses included in the report) generated 82.1% of the market’s total GGR. 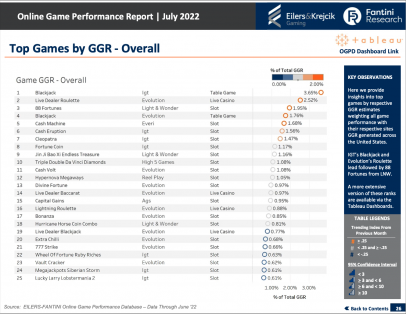 The breakdown of top individual game titles by GGR also shows how the market skews towards the most popular products. Here, the top five games analysed – out of tens of thousands – generated more than 11.5% of overall iGaming GGR.

IGT’s Blackjack was the highest grossing game included in the report, accounting for 3.7% of total market GGR alone.

Of the top 25 games included in the report, 11 were developed by Evolution. IGT were responsible for seven, while three were created by Light & Wonder. Reel Play, Everi, High 5 Games and AGS each had a single game appear in the top 25.

The overwhelming majority of top performing games (19) were slots, while four were live casino games and two were table games. 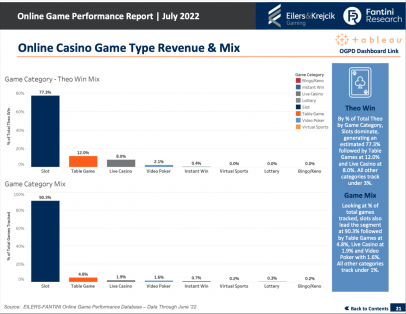 Perhaps unsurprisingly, online slots emerged as the dominant vertical in US iGaming by an overwhelming margin, accounting for more than three quarters (77.3%) of all reported GGR.

This is reflected in the number of slot games available on the market – which according to the report make up 90.3% of all available titles across the iGaming vertical. Six US states currently offer iGaming in some capacity.

Higher average bets on table games and live casino, however, meant those categories accounted for a larger proportion of GGR when compared to the number of games available in each category.

Table games, which make up just 4.8% of available iGaming titles, accounted for 12% of GGR, while the live casino category, which accounts for just 1.9% of games, brought in 8% of GGR.

It is important to recognise here, however, that Evolution is the only live casino supplier included in the report, while figures from Playtech and Light & Wonder subsidiary Authentic Gaming are not included. 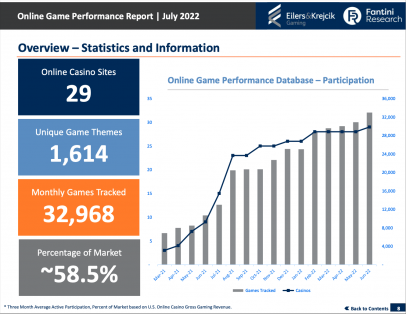 Eilers & Krejcik includes a vast quantity of data in its reports, covering some 58.5% of the US iGaming market and tracking close to 33,000 separate game titles every month across 29 online casino sites.

With legalised iGaming available in just six states, however, the data included in this report shows the beginning of the vertical’s growth trajectory, which will be further driven by the introduction of new legislation and regulation across additional US states in the months and years to come.