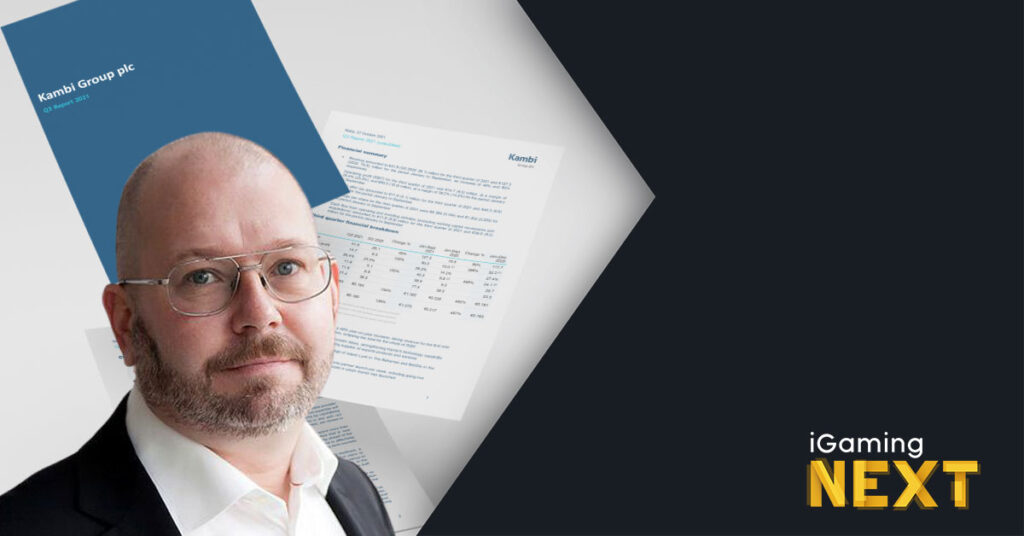 Sportsbook provider Kambi released its Q3 2021 financial report this morning (27 October), showing significant growth for the business during the period, with €41.6m reported in revenue, up 48.0% from Q3 2020.

Earnings per share equalled €0.384 for the quarter, and €1.302 for the period from January to September.

On average, Kambi said its reach had expanded by one partner launch per week during the quarter, including its launch into the Arizona online market on the first day of opening, marking the 15th US state in which the business is currently providing its offering.

The business’ launches during the quarter included those in partnership with Penn National Gaming’s Barstool Sportsbook app in five US states: Colorado, Virginia, New Jersey, Tennessee and Arizona.

Other US launches during the quarter included the Arizona launch of Churchill Downs’ TwinSpires sportsbook, Kindred’s debut in Iowa and Parx Casino’s entry into the Michigan market.

Further, Kambi completed two retail partner launches in the US, with an on-property sportsbook at Penn National Gaming’s new Hollywood Casino York property in Pennsylvania and Churchill Downs’ sportsbook in partnership with the Tonto Apache Tribe’s Mazatzal Casino in Arizona.

In Europe, Kambi began the roll-out of the Belgian National Lottery (BNL)’s retail sportsbook network across the country, having previously launched the operator’s online sportsbook in Q2.

At the end of Q3, BNL had 33 properties running sports betting in partnership with Kambi, and the roll-out has continued into Q4, with BNL currently live with sports betting in around 80 of its more than 300 retail stores.

Kambi also issued an update on its partnership with Penn National Gaming, after the operator announced it had agreed to acquire Score Media Group, which plans to develop a sportsbook technology platform which Penn intends to leverage once completed.

Kambi said the announcement had no impact on its contractual agreement with Penn, and that the supplier will therefore not speculate on how or when the operator intends to move forward with its plans.

According to official data reported in the US, revenue from its partnership with Penn comprised between 5% and 10% of Kambi’s total revenue for the quarter.

Following restrictions put in place by the Netherlands’ newly launched licensing regime, several Kambi partners including Kindred, LeoVegas and Mr Green were unable to obtain licences in the jurisdiction in the first round of licensing.

Kambi said these operators are confident of obtaining a licence in the near future, however, and Kambi partner BetEnt was among the first 10 licensees named by Dutch regulator Kansspelautoriteit.

Several other operators, including Betsson, have recently spoken on the impact of their withdrawal from the Dutch market following the launch of the local licensing regime earlier this year.

Kambi said its acquisition of esports data supplier Abios earlier this year has strengthened its technology capability, “transforming Kambi into a leading supplier of esports products and services.”

Chief executive Kristian Nylén said: “The acquisition is also in line with our longer-term strategy to further modularise our platform and, with a strong balance sheet, we remain in a good position to explore additional acquisition opportunities in the future.”

Kambi also announced today that it has decided to start exercising a buyback mandate received in June this year, from today until 10 November, allowing it to repurchase up to a total of €12m worth of shares.

Kambi said the objective of the buyback is to achieve added value for Kambi’s shareholders, and to give the board increased flexibility with Kambi’s capital structure, for example as consideration for an acquisition.