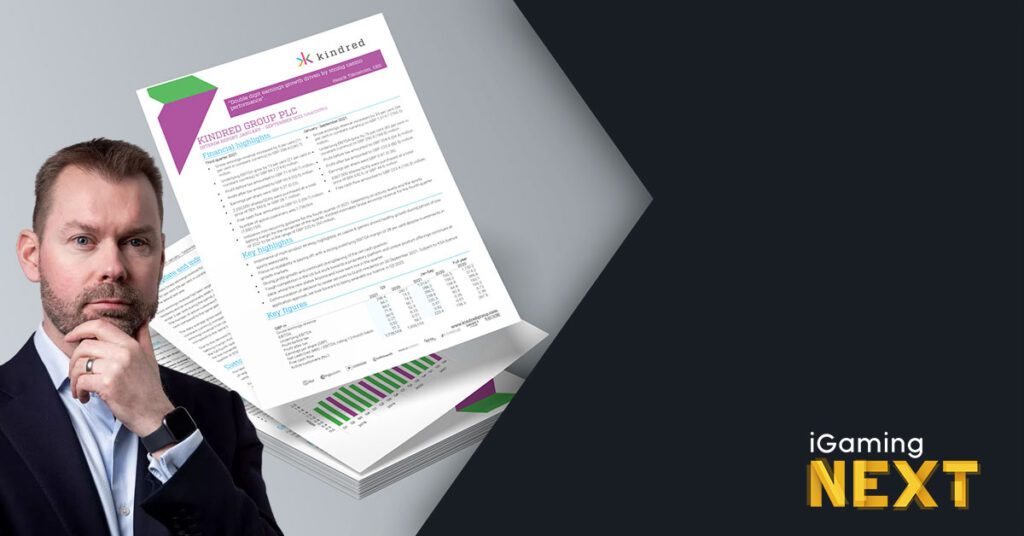 Kindred Group has today (27 October) released its financial report for the third quarter of 2021, describing the period as “strong” with total gross gaming revenue (GGR) coming in at £298.4m, up 6.3% year-on-year, or around 11% in constant currency.

The majority of Q3 GGR – 63.5% – came from markets in Western Europe, with a further 23.4% coming from the Nordics and 8.6% from central, eastern and southern Europe. Other markets, including the US, made up just 4.5% of the total GGR.

Kindred said the business continues to invest heavily in bonuses and marketing in the region, a cost which is most significant in the months following new state launches.

The operator is currently active in 6 US states, having launched sports betting in Iowa and Arizona during Q3.

Kindred said the growth was driven by strong casino performance, and that its number of active customers during the quarter grew from 1.65m in Q3 2020 to 1.74m.

After tax, profit for the first nine months of the year came to £220.3m, more than double the £80.3m recorded in the same period last year, giving the business earnings per share of £0.97 for the year-to-date.

However, despite the growth experience by the business, Kindred offered indicative non-recurring guidance to shareholders around its expectations for Q4 this year.

Due to the decision to cease offering services to Dutch residents, and the “exceptionally weak sports betting margin” seen during the first few weeks of this quarter, Kindred estimates Q4 GGR to fall in the range of £220m-£260m, suggesting a quarter-over-quarter decrease of between 12.9% and 26.3%.

During the first 24 days of Q4, Kindred said its daily GGR was 61% lower than the daily average for the same period in 2020. In addition to the impact of its withdrawal from the Dutch market, sports betting margin after free bets has remained below 2% during the period, compared to 13% for the same period last year.

The number of active customers during the first few weeks of the quarter has also decreased by 13% compared to 2020, while daily average gross sports betting turnover is down 21%. Average daily casino GGR is currently down 24% compared to last year.

Kindred’s chief executive, Henrik Tjärnström, said the operator looks forward to being awarded its license in the Netherlands in Q2 next year, subject to approval from Dutch regulator the Kansspelautoriteit (KSA).

However, according to Dutch regulations, Kindred will not be allowed to use the customer data it has built during its experience in the local market for any marketing activities once it has been licensed by the regulator.

Customers must create a new account with any operator after it receives a licence, and data built up by operators prior to the opening of the Netherlands’ licensed online market may only be used for responsible gambling and administrative messages.

This means the operator will effectively start from scratch in the market, and is likely to require significant investment to rebuild its customer base.

According to a press release from Kindred published last month, as long as the operator is unable to offer its products to Dutch customers, the situation is expected to have a negative impact on group EBITDA of approximately £12m per month – representing some 31.4% of its EBITDA based on Q2 2021’s total of £114.5m.

Commenting on Kindred’s recent €295m acquisition of online casino supplier Relax Gaming, Tjärnström added that: “This is a great development for Kindred as it further enables us to significantly differentiate both new and existing products, ultimately giving us more control of the offerings and providing our customers with a better experience.”

Other operators are also feeling the pinch as a result of withdrawal from the Dutch market and low sports betting margins in recent months.

Yesterday, in an interview with Pierre Lindh, Betsson chief executive Pontus Lindwall said the business did not expect Q4 to bring the same level of profitability as previous quarters for these reasons.

He said, however, that this is not a bad sign for the company in the long run, and that the low margins experienced were a natural element of operating in the sports betting vertical.