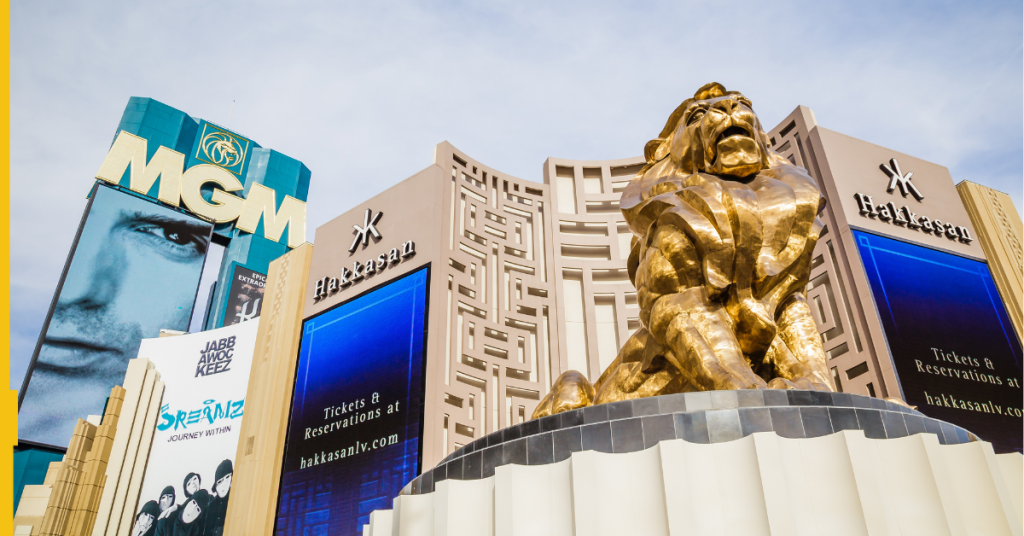 Industry consensus had MGM earnings of $0.17 per share heading into the Q3 results. The company reported losses of ($1.39) per share, its biggest EPS miss in more than a year.

MGM stock was down as much as 8% in after-hours trading immediately following the earnings announcement.

Despite the earnings miss, MGM reported record Las Vegas Strip Resorts revenue and adjusted property EBITDAR. The company was buoyed by a full quarter of the Cosmopolitan, a massive luxury casino hotel located near several other major MGM properties in the center of the Las Vegas Strip.

Company officials also touted a series of major recent moves and others to follow in a release along with the earnings. That included continued developments in Las Vegas, Japan and New York.

“We’re proud to report the best quarter in our Las Vegas Strip history, both on a revenue and Adjusted Property EBITDAR basis, driven by the continued appeal of our entertainment and meetings offerings,” said Bill Hornbuckle, CEO of MGM Resorts International, in a statement. “We achieved several key milestones during the quarter, including closing on the acquisition of LeoVegas and submitting our tender for a new gaming concession to the Macau SAR government.”

“Our outlook remains promising, with continued progress in our operations with BetMGM and development initiatives in New York and Japan as well as strong bookings into 2023 in our domestic operations,” Hornbuckle said. “We remain focused on achieving our vision to be the world’s premier gaming entertainment company.”

Macau has been a drain on the company’s bottom line as it has had multiple lengthy and ongoing casino closures and travel restrictions enforced by the Chinese government as it continues its “Zero COVID” policy. MGM properties, like its competitors, have in recent months been shut down multiple times for days or weeks with little or no notice.

MGM CEO Bill Hornbuckle: “Our outlook remains promising, with continued progress in our operations with BetMGM and development initiatives in New York and Japan.”

Despite the ongoing challenges, MGM’s Q3 results reaffirmed the company’s commitment to Macau, the world’s largest gaming market. The company this quarter submitted tender for a new 10-year gaming concession in Macau and one of its limited gaming licenses.

The company is among the favorites to earn one of three New York casino gaming licenses. MGM already operates Empire City Casino in Yonkers, and hopes to transition the property into a full, “Las Vegas-style” casino. A decision is expected next year.

MGM also reported improved losses in its BetMGM digital gaming platform. A 50/50 joint venture with European gaming giant Entain, BetMGM has been one of America’s largest mobile sports betting and iCasino platforms by handle, but has still not turned a profit for a full quarter.

Hornbuckle and other company officials said BetMGM was still on target for profitability sometime in 2023.

BetMGM losses were nearly ($23.6m) for MGM’s half of the deal during Q3 2022, compared to a loss of ($49m) in Q3 2021. MGM also finalized the acquisition of Swedish online casino gaming operator LeoVegas during the previous quarter.

Officials from Caesars, MGM’s Nevada-based casino operating rival-turned online gaming operator, announced they had positive contributions from their Caesars Digital platforms during the company’s Q3 earnings call Tuesday. FanDuel, the US market leader by gross gaming revenue, is the only major US sportsbook to post a positive quarter to date.