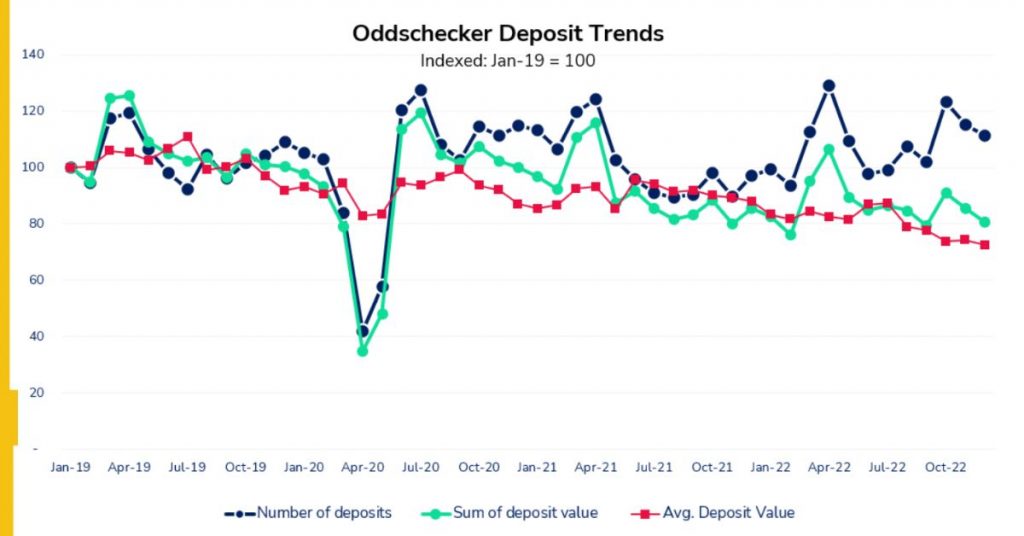 According to full-year 2022 data from Oddschecker, online sports betting has been affected by the cost-of-living crisis.

The UK-based affiliate, known for its odds comparison grid, has observed a decline in the average value per customer deposit across various sportsbooks including bet365, Sky Bet, William Hill, and Paddy Power.

Oddschecker attributes this trend to stricter affordability measures implemented by UK-licensed operators and increased pressure on discretionary spending due to the ongoing cost-of-living crisis.

Oddschecker: “We believe this metric serves as the canary in the coal mine for the cost-of-living crisis, despite the gambling industry traditionally harbouring a widespread perception of being relatively recession-proof.”

This marked the lowest average deposit figure recorded by Oddschecker since it began collecting data in January 2019.

“We believe this metric serves as the canary in the coal mine for the cost-of-living crisis, despite the gambling industry traditionally harbouring a widespread perception of being relatively recession-proof,” said Oddschecker.

Despite the decline in average deposits, the total sum of money being deposited has remained strong throughout the year, boosted by major sporting events such as the World Cup.

Oddschecker noted that average deposit value may rebound as the macroeconomic climate improves, although a shift towards higher margin products among operators, such as Bet Builders, could lead to the downwards trend continuing into 2023 if punters instead adopt a “little and often” approach to sports betting.

As of the end of the year, Oddschecker’s comparison grid included 27 different sports betting operators. Bet365 remained the dominant player, achieving the highest number of on-site bet slip clicks for every month of 2022.