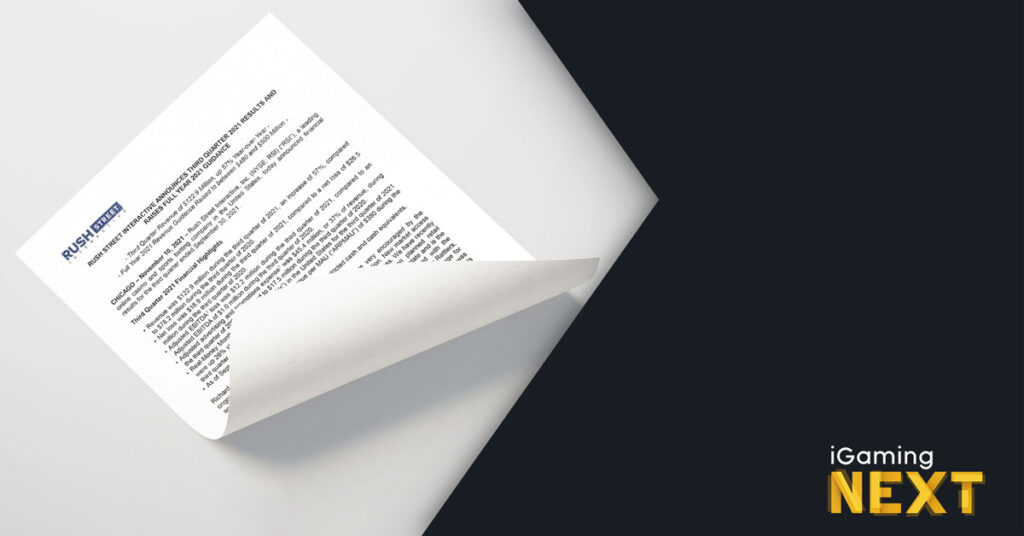 Rush Street Interactive (RSI), operator of BetRivers.com and PlaySugarHouse.com, has revealed a 57.2% increase in revenue year-on-year in its Q3 2021 financial report, as the business brought in $122.9m during the period.

However, the operator continued to make a loss during the quarter, with its net loss coming in at $18.9m, though this is a better result than the $26.5m net loss registered in Q3 2020.

Adjusted EBITDA loss was $12.2m, down significantly on the positive EBITDA figure of $1.0m recorded in Q3 2020.

General administration and other costs totalled $12.3m, while depreciation and amortisation cost the business a further $1.0m, giving total operating costs of $140.6m and a loss from operations of $17.7m.

After a further loss of $168,000 on foreign currency translation adjustment, the business declared a comprehensive loss of $19.1m.

However Richard Schwartz, chief executive officer of RSI, said: “We are very encouraged by the ongoing execution of our business strategy across the entire organisation. New market access and launches have continued to be a significant driver of our overall success.”

“We have recently launched the PlaySugarHouse online sportsbook and four of the fifteen planned retail sportsbooks in Connecticut. RSI is one of only three permitted operators in the state and is the exclusive partner of the Connecticut Lottery.”

“Additionally, we recently launched with the BetRivers brand for online sports betting in Arizona via our partnership with the Arizona Rattlers, as well as our social gaming platform, CASINO4FUN® in Ontario which will set the stage for future incremental revenues when the Ontario market goes live.”

This week, RSI was also selected as one of nine operators permitted to offer mobile sports wagering in the state of New York. When the brand goes live in the state, RSI will become one of only three businesses with online gaming market access in New York, New Jersey and Connecticut.

Following the results, RSI has increased its 2021 revenue guidance, which it now expects to fall between $480m and $500m, up slightly from its previous guidance of between $465m and $495m.