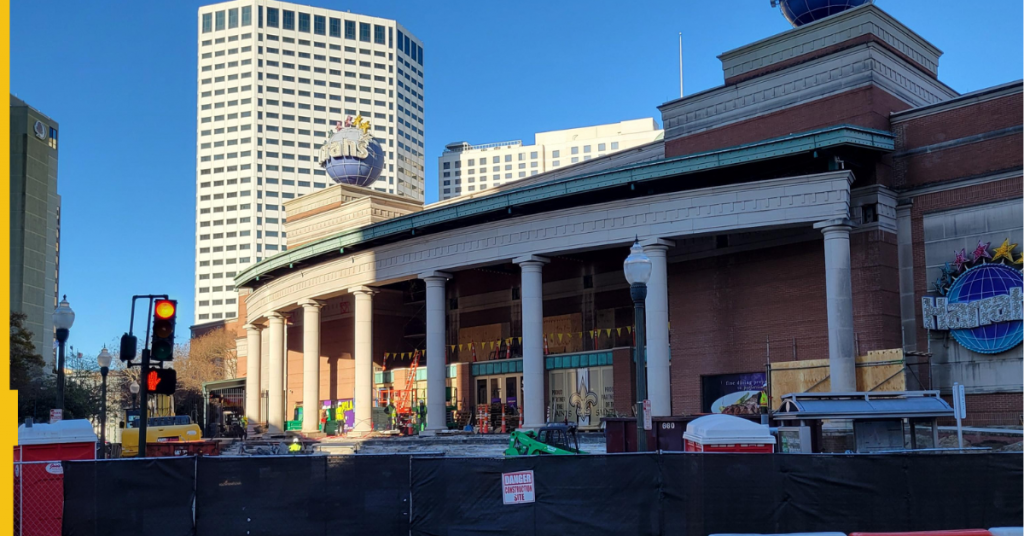 Harrah’s New Orleans, located a few blocks from Bourbon Street, Jackson Square and many of the city’s iconic entertainment destinations, is undergoing a $325m upgrade and conversion into Caesars New Orleans. Set to become just the third property under the Caesars flagship brand name, the updated property is part of a new era for brick-and-mortar casinos- one that includes natural light.

General Manager and Senior Vice President Samir Mowad spoke with iGaming NEXT’s Ryan Butler at the property’s new sportsbook, talking about the progress of the renovations and how the upgraded Caesars will cater to a new generation of casino patrons.

Ryan Butler: The first phase of the casino renovations features a new poker room and, maybe even more impressively, the adjacent sportsbook, including a massive video screen, odds boards, kiosks, tellers and a bar. What has the reception been to the new sportsbook since it formally opened last year?

Samir Mowad: “We believe that our product rivals anything you’ve seen anywhere in the country. The biggest feedback that we’ve gotten since opening this space is that it resembles the best sportsbooks in Las Vegas. Certainly, Vegas is always going to do its thing. But if you go outside of Vegas, I think we have probably the premier product in the country.”

“The video wall is the centerpiece of it. And we can feature three large games or if you wanted to get really small you can do around 120 images. And then, of course, the odds boards that wrap around. Our seating area has been super popular, and in fact, so popular that we yield it on the weekends; throughout football season, we rent these spaces so people can reserve them.”

“Then the bar has been a big hit as well, driving a lot of business besides just the sports betting and sports viewing aspect of it. The sportsbook bar is actually the first new bar we’ve opened at Harrah’s New Orleans in a while. It’s become popular on the weekends even after the live sporting events end for the day. It’s been a hangout spot.”

“So as this is literally the first phase that we opened up our transition from Harrah’s New Orleans to Caesars New Orleans, it’s just been a home run all around.”

RB: Much of the industry’s attention in recent years has been about digital casino gaming options, especially around the proliferation of sports betting mobile apps. These make the vast major of sports betting handle (for example, Maryland’s first month with legal online sports betting saw its digital offerings make up more than 95% of all bets), but it can’t replicate the retail experience. What does the Caesars retail sportsbook mean to the casino?

SM: “The Caesars app is great, but the app takes time in terms of signing up for getting your money and getting your money out. Now, it’s easier than it’s ever been, but there’s still a level of commitment there. I also think that when you’re in this sportsbook, and you get that Vegas feel, there’s something to coming in making your bet, then getting your ticket, and if the bet wins, you get your cash in hand immediately thereafter.”

“So I think that’s where our company and even the folks that are the minds behind Caesars, sportsbook, they really saw what this space needed to be versus at maybe a lot of our other destinations outside of Vegas and other “no- destination” markets. So it has been a home run from that perspective, even since we transition from the temporary sportsbook we opened in January 2022 to this space now. We’ve seen the average bet increase and all the other positive things that you would hope.”

$CZR is on pace to complete the renovation and rebranding of Harrah's New Orleans under the Caesars name by summer 2024, General Manager and SVP Samir Mowad reaffirmed to @iGamingNEXT today; property's new sportsbook and poker room opened last year pic.twitter.com/pOYXIXvVR7

RB: The sportsbook and poker room are the beginning of the massive renovations, which will eventually include a new food hall with natural lighting, something once unthinkable in a casino. What other details are underway to help the future Caesars New Orleans?

SM: “Some of the great things that we love to point out are the new column wraps. The old column wraps are pretty bulky and obtrusive. And we’ve now not only “Romanized” them, but modernized them by slimming them down to where it really allows for great viewing lines. You’ll also see the Caesars carpet, with images of Caesar’s head on that carpet underneath there.”

“The poker rooms have also been updated. That’s been a homerun as we’ve had football season and the holidays and all the folks coming into town for bowl games and New Orleans Saints games and events like that.”

RB: This casino has always had a special role in New Orleans, the first land-based casino in the state. Part of the future renovations come as part of a 30-year gaming license extension and a renewed commitment to the city. Leading up to this, how has that relationship grown and evolved in the previous 30 years?

SM: “I think it’s all part of the natural positive evolution of what our company has done here in New Orleans. Because when we opened up our temporary facility over 25 years ago, I don’t think people really knew what to expect with a land-based casino coming to New Orleans. I think that we were also trying to, at the time, blend in and be a part of the city. The casino had a New Orleans theme, with fake balconies that went down the casino “streets”, like you’re on Bourbon Street or something.”

“Now I think we’re a part of New Orleans. And we know people come to get New Orleans and Bourbon Street and the restaurants and the people and the amenities. They’re all right outside our door. But this is kind of how our next level of differentiating our experience from what’s going on in the city, while also being a great compliment and an entertainment asset for the city.”

RB: When Caesars New Orleans formally “opens” in summer 2024, it will be an example of the change in casino gaming from maze-like slot boxes to a full entertainment experience, even for “non-destination” properties outside Las Vegas or Atlantic City. What are your bottom line thoughts on where the industry stands now and its position in the overall hospitality and service industries?

“As an industry, we’re not so niche anymore. We’re a complete entertainment experience. It’s no secret now that in your “destination” markets like Vegas, you know, non-gaming revenue outstrips gaming. Our property will have not just casino gaming but local chefs on the property and full-service restaurants, among other entertainment options. All of this is part of our own value proposition as we look to stand out, because the competition for entertainment dollars has never been more intense.”