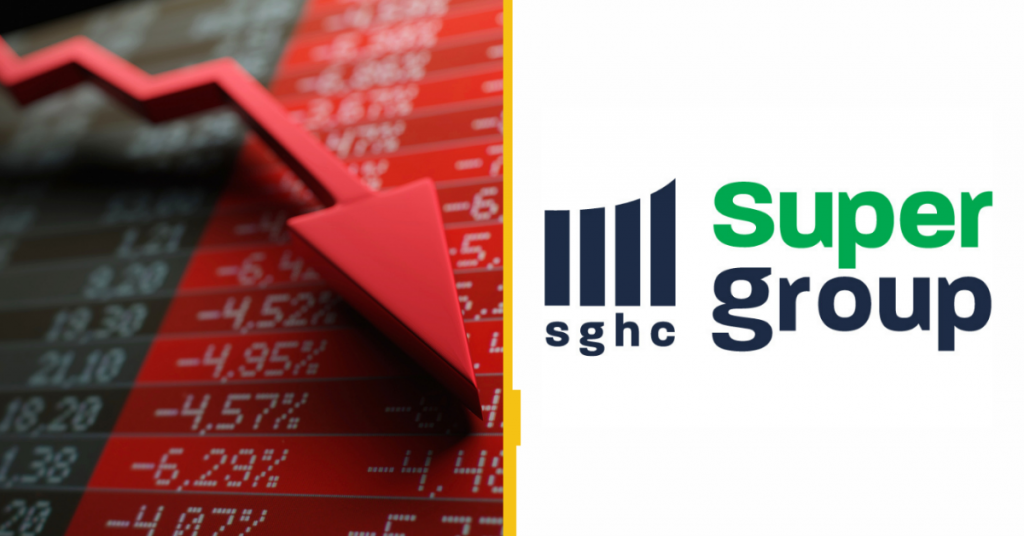 Shares in Betway owner Super Group have tanked by more than 27% after the firm released its first quarterly financial results since going public on the New York Stock Exchange.

Despite a 7% year-on-year increase in revenue for Q1 2022 to €334.5m, the business posted a loss after taxes of €163.2m after including €201.5m in costs and changes in fair values associated with Super Group’s business combination with a SPAC and subsequent public listing.

Due to the Q1 performance, Super Group CEO Neal Menashe explained that previously communicated full-year 2022 revenue guidance of €1.4bn would be “tough to meet or exceed”, which piled further downward pressure on the share price.

In the prior comparative Q1 period, Super Group posted a €38.6m profit.

Revenue growth in Q1 was driven by strong performance in Africa and Asia-Pacific markets, although this was offset by tightening regulation and withdrawal from some key European markets.

Indeed, revenue from Africa and the Middle East across both the Betway (sports betting) and Spin (casino) brands grew by 54.3% to €65.1m, while Asia-Pacific revenue increased by 16.6% to €79.2m.

Meanwhile, revenue from North American markets was flat by comparison, delivering year-on-year growth of 1.2% to €150.5m, while Latam revenue grew 7.1%, but still made up a minority of group revenue at just €6.9m.

During the firm’s Q1 earnings call, Menashe explained this was due in part to pulling its online casino operation from the German market between Q1 2021 and Q1 2022, as it has not received an online casino licence in a jurisdiction which is proving increasingly complex to navigate.

The business is still in the process of assessing whether launching online casino in Germany is viable, Menashe explained, due to the prohibitively high tax rate in the region.

In the Netherlands, where Super Group was able to provide its full online casino and sports betting offerings in the prior year period, both the Betway and Spin brands are now waiting to be granted new licences and are therefore unable to generate revenue from the market at present.

Further, new jurisdictions are on the horizon as Betway has already been granted registration by the Alcohol and Gaming Commission of Ontario and is active in Canada’s first regulated iGaming and online sports betting market, while the group is also expecting Spin to receive its registration in the near future.

By vertical, online casino was the group’s biggest earner during the quarter, generating €204.5m, or 61.1% of revenue, while sports betting generated €109.5m, or 32.7% of total. The remaining €20.5m was derived from brand licensing and other sources.

Super Group CEO Neal Menashe: “Our team has become accustomed to navigating the business through changing and challenging environments, and we believe the strategies that we are executing on will enable us to continue doing so as we take Super Group from strength to strength.”

Key highlights for Super Group during the quarter included launching a regulated sports betting and casino offering in Bulgaria and signing nine new sports partnerships, bringing the group’s total number of brand partnerships to more than 70 across more than 20 territories.

At the end of the quarter, Super Group held assets with a total value of €828.1m, including €272.7m in cash and cash equivalents.

“During the first quarter of 2022, Super Group began operating as a US publicly listed company and continued to expand in both existing and new markets in line with our growth strategy,” commented Menashe.

“Our team has become accustomed to navigating the business through changing and challenging environments, and we believe the strategies that we are executing on will enable us to continue doing so as we take Super Group from strength to strength.”

Alinda van Wyk, CFO of Super Group, added: “The results for the first quarter of 2022 reflected revenue growth and strong cash generation but were challenged on a period-over-period comparative basis due to industry and economic headwinds and costs related to our business combination and listing as a public company in January.